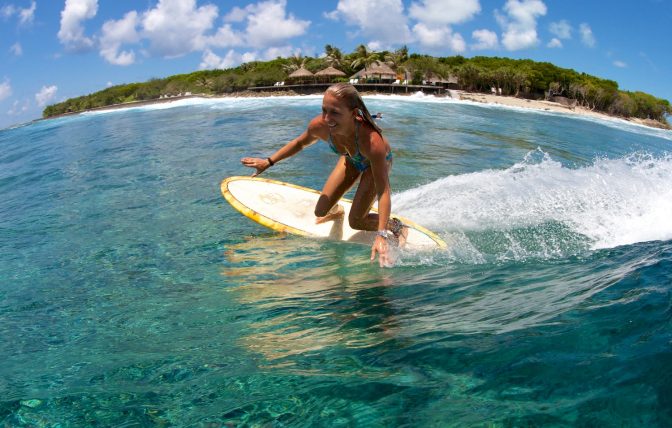 Maldives is among the best surfing holiday destinations in the world. The tiny island nation with perfect warm weather along with some of the best surf breaks on the planet attract the surfers around the globe.

Maldives surf is characterized by a great variety of reef breaks, ranging from hard hitting walls to long chill out rides. The surfing season in the Maldives is dependent the seasonal monsoons. The surf season begins in late February and lasts through to mid-November, with the best waves coming in during March and April. The waves averages a 4-5 feet and can reach heights of up to 12 feet in peak surfing season.

Looking for the best surf spots in Maldives. Here are top 10 surf breaks in the Maldives;

Located on Himmafushi Island in Male’ atoll, Jailbreak is considered by many to be the fastest wave to be found anywhere in the Maldives and is frequently described as perfection.The beauty of Jailbreaks is depending on where you take-off it can be a little of whatever you want it to be – from forgiving mellow walls to full-on, fat-lipped barrels.

Cokes break is named for the coke factory on Thulusdhoo island located in Male’ atoll, where the break is based, Cokes is all about the barrels.Few would argue that this hard, hollow right-hander rates as one of the entire Maldives brightest surfing gems. And certainly where the North Male Atolls are concerned there is no doubt that it headlines as its main draw.

North Malé atoll’s most northern break, this wave holds swell size from 3ft to well over 10ft. The left-hander was named after the wild chickens that roam the island it breaks off.

The most consistent wave in Laamu, working best under strong SE swell when thick barrels and a powerful inside section can be punishing. For luxury travellers who also like to ride waves, this surf spot breaks off of the stunning Six Senses Laamu.

Another right-hander, protected from the south-southwest winds. A hollow wave that that breaks hard on a shallow inside reef and better surfed at mid-high tide. This is the wave that handles the biggest swells at all tides.

LUX* North Malé Atoll’s best-kept secret is its very own seasonal summer wave: The LUX* Break. Located a mere five-minute jet ski ride away from the resort, it offers the ideal conditions for beginners – it has gentle swells and ranges between 1 and 2 meters.

Breaking off Hudhuranfushi Resort, Lohis really comes into its own when the swells are bigger, linking its two sections for almost ridiculously long rides.Formerly and for several years running the venue for the WQS O’Neill Deep Blue event, left-hander Lohis or Lohifushi is another of the Male Atoll’s bright stars.

The other half of the Thamburudhoo twin-headliners, left-hander Honkys – like its right-hand counterpart Sultans – is known for its long ride lengths. Also like Sultans, Honkys can be a fun, forgiving wave and therefore popular with all-comers but also has its challenges for those who need a little more.

Located in Cinnamon Dhonveli Resort’s and the resort is one of the most exclusive Maldives surf resorts. Pasta Point is known for its consistency in dishing up perfectly-shaped left-handers which means you’ll often hear it referred to as a wave machine.

Right-hander Sultans is beloved by the surf-passionate for several reasons. First it is dubbed ‘user-friendly’ because unlike some of its other Male Atoll counterparts it can be an easier alternative for less experienced surfers or those who want to tuck into a barrel or two without having to work too hard or get back on their game after a spell out of the water.