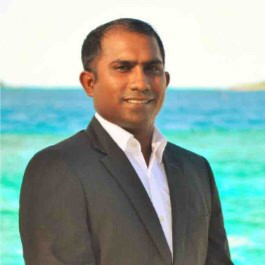 Adam Aneel Ahmed had been promoted as the Front Office Manager at The Nautilus Maldives. He joined there on September 2018 as the Executive Housemaster. He has been working in the Tourism Industry for over 10+ years now. Before joining the Nautilus Maldives, he was the Cheif Butler at the St. Regis Maldives Vommuli Resort.

Aneel completed an Honours Degree in Tourism Management and Hospitality at Munnar Catering College in Kerela, India. After his graduation, he started his career in the industry as a Butler at the Hilton Worldwide.

Aneel also worked at Anantara Kihavah Maldives and worked his way up. He joined as a Villa Host and later became the Senior Villa Host and then got promoted as the Villa Host Supervisor in 5 years time. He has proven his commitment and determination to work since 2008 and continues to do so.