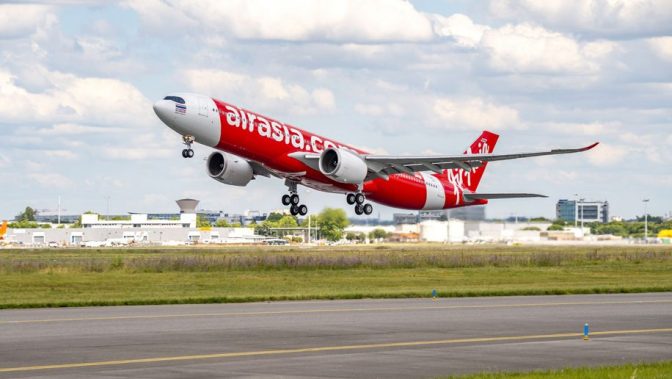 AirAsia has taken delivery of its first A330neo aircraft, to be operated by its long-haul affiliate AirAsia X Thailand.

The aircraft was delivered via lessor Avolon and is the first of two A330neos set to join the Malaysian low-cost carrier’s fleet by the end of the year.

The new generation aircraft will be based out of Bangkok’s Don Mueang International Aiport.

A330neo is expected to bring a step-change in fuel efficiency for AirAsia’s long-haul operations with its enhanced economics. The aircraft features 377 seats in a two-class configuration, comprising 12 Premium Flatbeds and 365 economy class seats.

Currently, AirAsia X Thailand operates 36 A330-300 aircraft and is the largest customer for the A330neo with 66 on firm order.

According to Airbus, the A330neo is the true new-generation aircraft building on the most popular wide-body A330’s features and leveraging on A350 XWB technology. Powered by the latest Rolls-Royce Trent 7000 engines, the A330neo provides an unprecedented level of efficiency – with 25% lower fuel burn per seat than previous generation competitors.

AirAsia X is a Thai long-haul low-fare airline headquartered and based at Don Mueang International Airport in Bangkok. It is a joint venture of AirAsia X from Malaysia and Thai AirAsia.