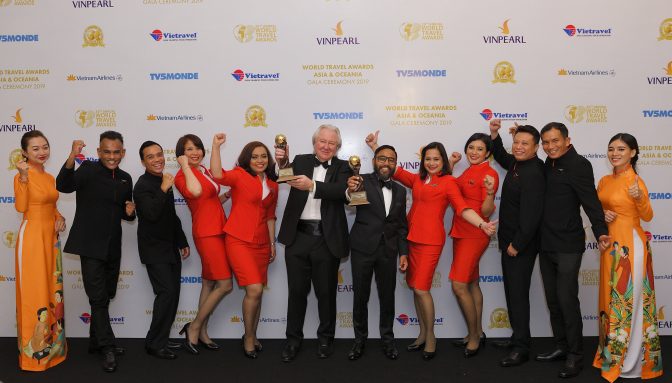 AirAsia has continued its winning streak, taking out top honors at the World Travel Awards Asia and Oceania 2019 for the seventh year in a row.

The awards were accepted by AirAsia Malaysia CEO Riad Asmat in the presence of industry representatives and key figures from across the region at a gala ceremony held at the Vinpearl Convention Centre here yesterday.

AirAsia Malaysia CEO Riad Asmat said, “It is an honor to receive these awards. Being recognized by guests and industry colleagues as Asia’s best is a testament to our ongoing efforts to develop new and innovative guest-obsessed products and services. We would like to thank our Allstars, especially our award-winning cabin crew, for their hard work and commitment to delivering and providing the best experience for our guests.”

World Travel Awards Founder Graham E Cooke said, “AirAsia continues to set the benchmark for low-cost aviation in Asia and beyond. Its dedication to improving its services remains unrivaled and I am delighted that it has been acknowledged by both the travel trade and the public having been voted ‘Asia’s Leading Low-Cost Airline 2019’ and ‘Asia’s Leading Low-Cost Airline Cabin Crew 2019’.”

The World Travel Awards are one of the most prestigious, comprehensive and sought after awards programs in the global and tourism industry. Established in 1993, they acknowledge, reward and celebrate excellence across key sectors of travel, tourism, and hospitality. The World Travel Awards brand is globally recognized as the ultimate hallmark of industry excellence.