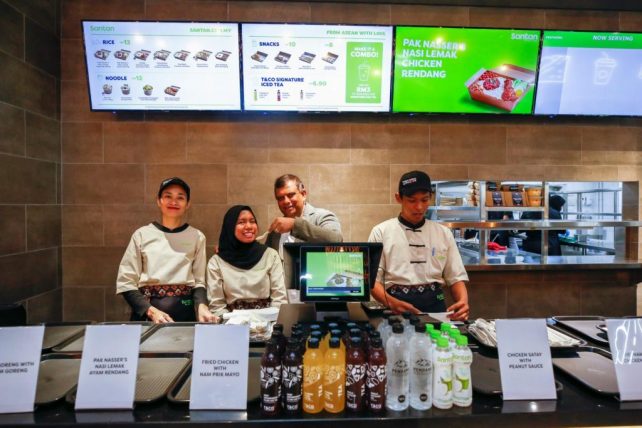 AirAsia on Monday opened its first quick-service restaurant and cafe, based on the airline’s inflight Santan menu and T&Co coffee, in a mega-mall in Mid Valley, a central shopping haven in Kuala Lumpur.

By the end of 2020, the airline group aims to own five Santan restaurants and, within the next three to five years, have 100 franchise-operated restaurants and cafes in global markets, according to the general manager of Santan Restaurant and T&Co Cafe, Catherine Goh. AirAsia is hoping to open in locations where lots of U.S. fast-food chains, like McDonald’s, draw crowds of hungry Asians currently.

Santan means “coconut” in Malay and is a popular ingredient in the cuisines of Southeast Asia. T&Co is a company in which AirAsia has an 80 percent stake; it supplies inflight coffee and tea solutions to AirAsia, which also runs a “Barista in the Skies” service offering premium handcrafted coffee such as espresso, long black, cappuccino, and café latte onboard select flights.