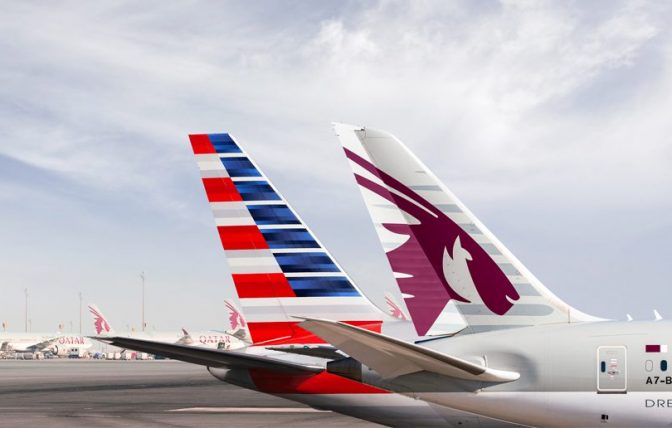 American Airlines and Qatar Airways have signed a strategic partnership deal and a codeshare agreement to enhance travel choices for their passengers.

The news is American’s second shocker this month, coming two weeks after it announced it would move closer to another occasional adversary, Alaska Airlines, also with an updated codeshare and strategic partnership agreement. But American and Alaska never had the same acrimonious relations as American and Qatar, which have sparred over concerns Qatar might compete unfairly by taking government subsidies. American, like United and Delta, had wanted the U.S. government to limit Gulf carrier flights to the United States, but the Trump Administration has shown limited interest.

Of all the airlines, American and Qatar probably had the most unique relationship. In 2017, Qatar Airways tried to buy up to 10 percent of American, and American’s management went berserk, telling employees the airline wanted to block it. After American canceled an existing codeshare agreement, Qatar backed off. During the saga, Akbar Al Baker, Qatar’s CEO, said U.S. airlines offered “crap” service and employed only grandmothers as flight attendants, drawing a rebuke from Jill Surdek, then American’s vice president of flight service, who called it “both sexist and ageist at the same time.”

Al Baker remains in charge, and Qatar hasn’t altered its model. But American’s strategic philosophy has changed in recent months, as the airline engages in a global competitive battle with Delta Air Lines. American’s stance seemed to change after last October, when Delta unexpectedly stole American’s partner in South America, Latam Airlines, and began to add point-to-point flights from Miami, an American hub.

American has made a slew of announcements since, many that seem designed to tweak Delta. It has added flights in Delta strongholds, like Boston and Seattle, and worked out a deal with Alaska, a fierce Delta competitor. Now, American will restore and improve its codeshare relationship with Qatar — it should be more comprehensive than the pre-2017 arrangement — and American soon may fly nonstop from the United States to Doha.

In a joint note Tuesday to employees, CEO Doug Parker and president Robert Isom acknowledged the agreement may seem unusual, but they said it’s the right move for the airline given the current landscape.

“We can’t announce today’s news with Qatar Airways without acknowledging there have been differences between our airlines,” they said. “However, during the past several months the dialogue has been good, and we have agreed that we can move forward and begin a new chapter.”

Access to New Markets
If you take away the fight over subsidies, the tie-up with Qatar is an obvious move, as the deal should benefit both carriers.

American is weak in the Middle East, India, and Africa, where Qatar is strong. Within a few years American could fly its jets to Doha, where its customers would transfer to Qatar aircraft for a connecting flight.

In an interview, Vasu Raja, American’s senior vice president for network strategy, said his airline’s most loyal customers now will have more one- and two-stop choices to markets like Hyderabad, Chennai, Mumbai, Karachi, Islamabad, and Nairobi. Many of the markets are growing, he said, but do not yet have enough demand for American to send a Boeing 787, nonstop from the United States, while some are too far for American’s jets to reach.

“We want to be able to build the most comprehensive network for our customers,” Raja said. “Increasingly, they want to go to Africa, the Middle East, and India. This fits right into that. When you look at so many of the markets in that part of the world, there’s a ton of growth but there’s a low base of demand.”

Meanwhile, Qatar will get access to many markets in the Americas. Today, it flies from Doha to 10 U.S. cities. That sounds like a lot, but the airline has no good way to get its customers anywhere else. With the change, the customer profile on a route like Doha to Dallas-Fort Worth should immediately change, with more customers making connections in American’s hub to cities in the Southern United States. Through all of American’s hubs, Qatar will have access to places like Austin, Oklahoma City, St. Louis, and Raleigh, along with new destinations in the Caribbean and Latin America.