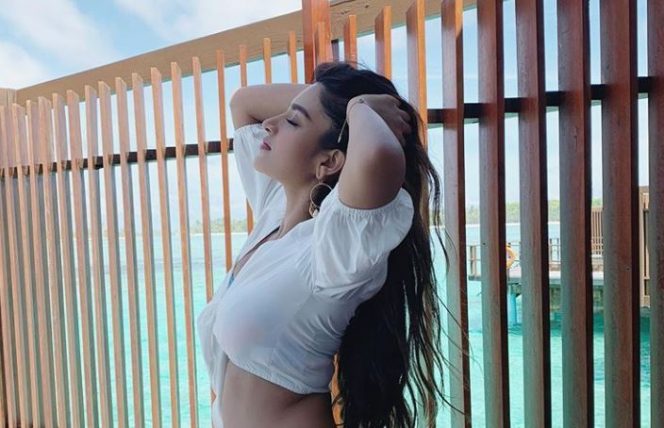 Indian model, dancer and actress, Nidhhi Agerwal has been seen in Maldives at Paradise Island Resort for the recording of Undipo lyric video presented by the creators of iSmart Shankar.

Born in Hyderabad and raised in Bengaluru, Nidhhi began her career in Munna Micheal, a Hindi film where she played the lead role. She has since signed a film of KriArj Entertainment which will be directed by Shree Narayan Singh and she is also expected to star in Akshay Kumar’s Ikka directed by Ali Khan, it is a remake of 2014 Tamil hit Kaththi.

Currently, she is working on the filming of iSmart Shankar which is a Telugu film expected to release within late July 2019. Undipo is composed by veteran musician Mani Sharma with lyrics written by Bhaskara Bhatla and is a calming number filmed in Ram, Gujarat and on the exotic beaches of the Maldives.

Niddhi has shared a series of captures of her vacation to Maldives on her Instagram profile (@ nidhhiagerwal).

Located at North Male’ Atoll, Paradise Island Resort is only 9.6Km away from Velana International Airport, which takes approximately 20 minutes by speedboat. There are 282 rooms on the island and this is one of the biggest resorts in the Maldives. Room types include Superior Beach Bungalows, Water Villas, Haven Villas, Haven Suites, and Ocean Suites.