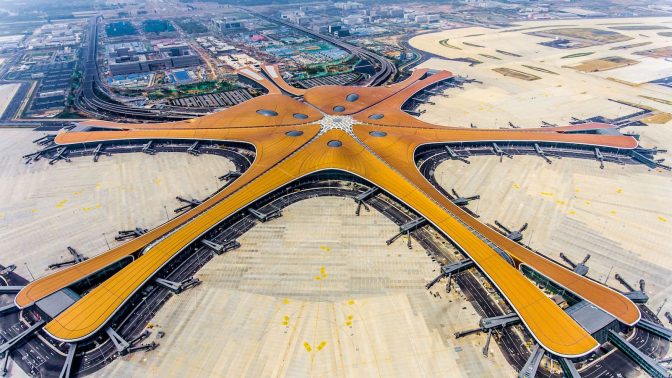 China is ready to open a new mega-airport ahead of the 70th anniversary of the People’s Republic.

China will celebrate its national day on October 1 and Beijing Daxing International Airport is expected to open before then, on September 30. The airport has scheduled the first commercial flights to Hong Kong and Guangzhou on China Southern Airlines today, according to flight information on Flightradar 24.

China’s state media agency said the construction for the airport, located around 46km from central Beijing, was completed on June 30, as planned. “It is the world’s largest integrated transportation hub,” Bai Henghong, director of the Beijing Daxing International Airport project, told the agency. “The terminal building is also the world’s largest built with a seamless steel structure, boasting the world’s first design of double-deck departure and double-deck arrival platforms.”

The multibillion-dollar Daxing, designed by the late architect Zaha Hadid and her Chinese partners, is built for the future, boasting four runways and a terminal the size of 97 soccer pitches upon the opening of the first phase — as well as customer-service robots that will provide travelers with flight updates and airport information.

Nicknamed “starfish” by Chinese media for its shape of five concourses connected to the main hall, Daxing aims to reduce walking for passengers, long a complaint about many new mega-hubs. The airport authority has promised a distance of no more than 600 meters (650 yards) — about eight minutes of walking — between security checkpoints and the remotest gates.

The new Beijing airport has already been through a series of operational tests with Chinese airlines. Around 500 flights were expected to take part in these tests, and there were simulations of 52,000 passenger journeys to iron out any issues.

At the moment, Beijing’s Capital International Airport is the second busiest airport in the world, after Atlanta in the United States.