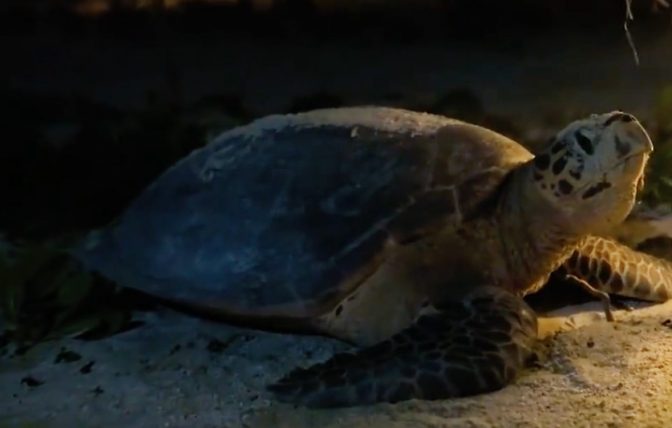 Team members of Kagi Maldives Spa Island witnessed Mother Nature’s wonders first hand on Saturday, 15 May 2021, when a critically endangered Hawksbill sea turtle laid her eggs at the resort’s beachfront, eight days before World Turtle Day on 23 May, an annual observance to shine a light on the need to protect turtles from their disappearing habitats across the world.

After the mother turtle slowly dragged herself back to the ocean, the resort team promptly secured the nesting site with a protective fence and clearly marked with a ‘Do Not Disturb’ sign. The resort hopes to see the emergence of the hatchlings by the end of July. This was not the first event where a turtle laid eggs at the resort, as there are currently two more nests expected to hatch in June.

Like many sea turtles, Hawksbills also known as Eretmochelys imbricata, are listed as critically endangered on the International Union for Conservation of Nature (IUCN) Red List, due to their beautiful, translucent shell being used for decoration and fashion purposes.

According to studies carried out by the Olive Ridley Project, Hawksbill turtles reach sexual maturity at around 30 years of age and can lay up to 200 eggs in each nest that take forty-five to sixty days to hatch. Interestingly, female Hawksbill turtles return to their hatching sites every two to three years to lay their own eggs.

Located at the tip of North Malé, which is in the heart of Malé Atoll, Kagi Maldives Spa Island is a luxury boutique resort offering a mindful wellness retreat in an inspiring island setting. The 50 all-pool villa resort boasts a spectacular house reef surrounding the island where many resident sea turtles thrive, and some of which choose the island resort as their nesting ground.