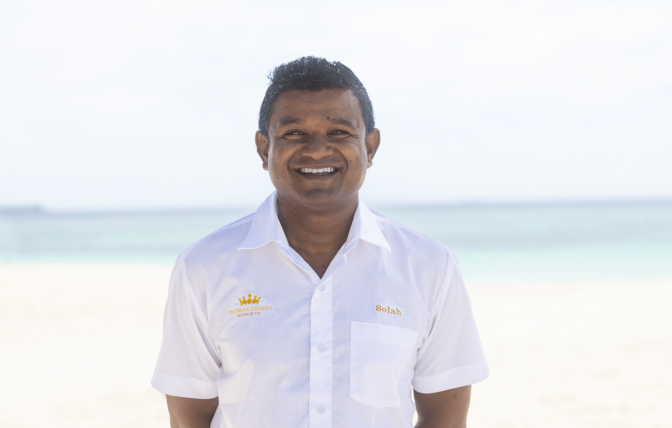 The Maldives is on its way to prime the industry, with endless tourists around the world starting to discover this ideal island destination and falling in love after the pandemic creating more excitement and travel plans. Crown & Champa Resorts (CCR), reflecting the essence of their very own Maldivian hospitality, prepares their resorts for the coming festive season with their new Chief Operating Officer (COO), Mohamed Solah.

Solah is a passionate individual, an inspiring leader, and an excellent guest service specialist with over 20 years of experience. As a little boy who visited the local islands with his grandfather, his enthusiasm and excitement grew towards the hospitality industry by looking at the service provided by host communities. His little spark at that moment led him to choose hospitality as a career path in secondary school.

Solah is a pioneer in hospitality operations and an impressive academic that has peaked his education. From his initial Higher Diploma in Hospitality from Maldives College of Higher education, he went on to complete his Bachelor of Honours in Hospitality and Tourism Management certified by the University of Toulouse, France, affiliated with the University of Taylor’s, Malaysia specializing in International Hotel and restaurant management and Hospitality Marketing Management. In 2020 he completed his Master of Business Administration for Executives at the University of Bedfordshire, UK, followed by the prestigious General Manager Program with Cornell University, United States 2022.

“Along with his enthusiasm, positive energy, and attention to details, Solah brings a special leadership skill that fosters a positive and collaborative attitude within the team. Solah is special for his ability to connect with guests and be sensitive to their needs. As a result, Solah and his team have been consistently recognized as one of the top 10 resorts in the Maldives…” – PASCAL MONGEAU on Linkedin

Solahs’ resume is as impressive as his passion for the hospitality industry in perfecting the guest experience and hotel reputation. He was inbreeding talent of CCR since his initiation of the industry as a Receptionist at Meeru Island Resort and Spa in 2002, with a significant rising through the ranks and responsibilities till he was appointed as the Room Division manager in 2011. In 2013 Solah became the Director of Operations for the adventurers’ paradise Vilamendhoo Island Resort and Spa. After preopening in Amilla Maldives and Zaya Nurai Island, Abu Dhabi, UAE as a preopening member in 2014 & 2015 consecutively, Solah returned to CCR as the preopening Director of Operations at Hurawalhi Maldives Resort in 2017.

Solah proceeded to take over the challenge of becoming the preopening Resort manager of the top-luxury/beacon private island, Kudadoo Maldives. Solah became the General Manager of Komandoo Island resorts in the Maldives in 2018, bringing the resort to the excellency we now experience. Before the return of Solah to CCR as the new COO, he held the position of Cluster General Manager for Zaya Hospitality in UAE while being the lead in the preopening of Zaya Al Barari Seventh Heaven & Hameni by Zaya, both 5-star city hotels which are based in the heart of Dubai, UAE.

“It is my pleasure to recommend Solah as a very capable professional whose career I have followed over many years and compliment him on his continued career progression. During the time that we worked together, he proved to be a trustworthy, loyal, helpful and friendly role model for his colleagues.
Best wishes to you…” – DAVID FEINBERG on Linkedin

Solah possessed the same cheerful personality during his tenure with Komandoo Island Resort & Spa. His leadership navigated to resort to master market capturing and reputation upliftment with his immense experience in Guest service management & Customer experience optimization. His contribution led the resort to be among the top 1% of hotels and win TripAdvisor’s “Best of the Best” awards with 9.6 out of hotel ratings across channels. Komandoo also received the “Best Beach Resort in the Maldives” – Luxury travel Award 2020 because of the immense dedication Solah held toward Komandoo Island Resort & Spa and Crown & Champa Resorts group.

Solah’s arrival is an immense pleasure for the CCR family as well as the travellers worldwide who have experienced his excellency in service management and guest experience.

CCR Family welcome Mohamed Solah once again to the Crown & Champa Resorts Team for a new journey of success!