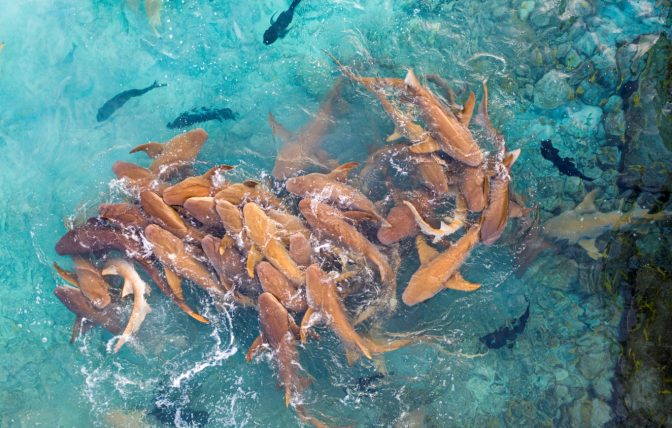 Sharks are some of the most beautiful creatures in the ocean and in a country like Maldives, it is the only destination in the world where you can see these gentle giants all year round. So why not dive below the surface for a swim with majestic creatures of the seas on your next vacay to the Maldives?

Keep scrolling more to learn 10 interesting shark facts before you head off to a friendly encounter with these beasts.

1. Sharks do not have bones: Instead, they have cartilage — that’s what makes up human noses and ears. Sharks use their gills to filter oxygen from the water. They are a special type of fish known as “elasmobranchs”, which translates into fish made of cartilaginous tissues. Their cartilaginous skeletons are much lighter than true bone and their large livers are full of low-density oils, both helping them to be buoyant.

Even though sharks don’t have bones, they still can fossilize. As most sharks age, they deposit calcium salts in their skeletal cartilage to strengthen it. The dried jaws of a shark appear and feel heavy and solid; much like bone. These same minerals allow most shark skeletal systems to fossilize quite nicely. The teeth have enamel so they show up in the fossil record too.

2. Each whale shark’s spot pattern is unique as a fingerprint. The world’s biggest sharks also have the widest mouths and eat only tiny ocean plankton, just like the largest whales. They can grow to 12.2 meters and weigh as much as 40 tons by some estimates!

The best place to swim with whale sharks in the Maldives is the South Ari Atoll. They frequent the channel to the south of the atoll and can be spotted year-round. The best islands for whale shark tours are Dhigurah, Dhangethi and Maamigili.

3. Sharks are aged by counting the rings on their vertebrae.
Shark vertebrae contain concentric pairs of opaque and translucent bands. Band pairs are counted like rings on a tree and then scientists assign an age to the shark based on the count. Thus, if the vertebrae has 10 band pairs, it is assumed to be 10 years old. However, researchers must also study each species and size class to determine how often the band pairs are deposited because the deposition rate may change over time.

4. Not all sharks have the same teeth. Mako sharks have very pointed teeth, while white sharks have triangular, serrated teeth. Each leave a unique, tell-tale mark on their prey. A sandbar shark will have around 35,000 teeth over the course of its lifetime!

5. Many sharks lay eggs, but some give birth to live young, just like we do. Shark pregnancies can last from a few months to well over a couple of years. That’s longer than whales or elephants!

7. Hammerhead sharks elongated heads not only give them supersense when it comes to electromagnetic detection, but they also have almost 360-degree surround vision.

8. Shark skin feels similar to sandpaper: because it is made up of tiny teeth-like structures called placoid scales, also known as dermal denticles. These scales point towards the tail and help reduce friction from surrounding water when the shark swims.

9. When sharks are turned upside down, they go into a natural suspended state called tonic immobility.

10. Sharks have been around a very long time. Based on fossil scales found in Australia and the United States, scientists hypothesize sharks first appeared in the ocean around 455 million years ago.