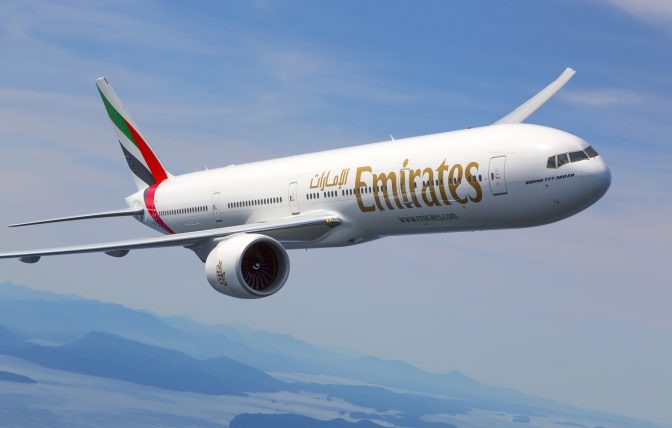 Emirates Halts Most of its Passenger Flights

One of the world’s biggest airlines, Emirates, said it was suspending most of its passenger flights starting March 25th. Emirates will continue to operate passenger and cargo flights to the following countries and territories until further notice, as long as borders remain open, and there is demand: the UK, Switzerland, Hong Kong, Thailand, Malaysia, Philippines, Japan, Singapore, Australia, South Africa, South Korea, USA, and Canada.

It’s a pivotal move that reflects the dramatic slowdown in traffic through the airline’s hub in Dubai, the world’s busiest international airport, due to disruptions caused by the COVID-19.

The state-owned carrier stressed in a statement that it will continue to operate cargo flights through its fleet of Boeing 777 freighters for the transport of essential goods, including medical supplies across the world. It also said the company would reduce salaries for the majority of its employees for three months, but will not cut jobs.

Airlines around the world are struggling to cover their costs and pay salaries with their fleets grounded and countries shutting their borders to travelers.

In the Middle East, airlines have lost more than $7 billion in revenue as of March 11, according to the International Air Transport Association. The group says 16,000 passenger flights have been cancelled in the Middle East since the end of January.

In a statement released, Emirates said it tried to maintain passenger flights “for as long as feasible” to help travelers return home amidst all the travel bans, restrictions, and lockdowns.

Emirates Group CEO and Chairman Sheikh Ahmed bin Saeed Al Maktoum described the situation as “an unprecedented crisis” and said “the world has literally gone into quarantine” due to the virus and the illness it causes called COVID-19, which has infected more than 300,000 people around the world.

The United Arab Emirates, which is home to Dubai and Abu Dhabi, has all but closed its borders to travelers with exceptions for those transiting through or Emirates returning.

Al Maktoum said the company was doing well financially at the start of the year, but that the virus “has brought all that to a sudden and painful halt over the past six weeks.”

“We find ourselves in a situation where we cannot viably operate passenger services until countries re-open their borders and travel confidence returns,” he said.

The company, which also operates an airport ground services company called dnata at locations around the world, had already urged employees to take paid and unpaid leave.

To save costs further, it said it was temporarily reducing the basic salaries of the majority of Emirates Group employees for three months, with cuts ranging from 25-50%.

“We want to avoid cutting jobs. When demand picks up again, we also want to be able to quickly ramp up and resume services for our customers,” Al Maktoum said.

Emirates posted profits in its most recent fiscal year of $237 million, down from $762 million the year before. The airline’s aggressive expansion and growth helped transform its hub at Dubai International Airport into the world’s busiest for international passengers. Emirates carried around 58 million passengers last year.