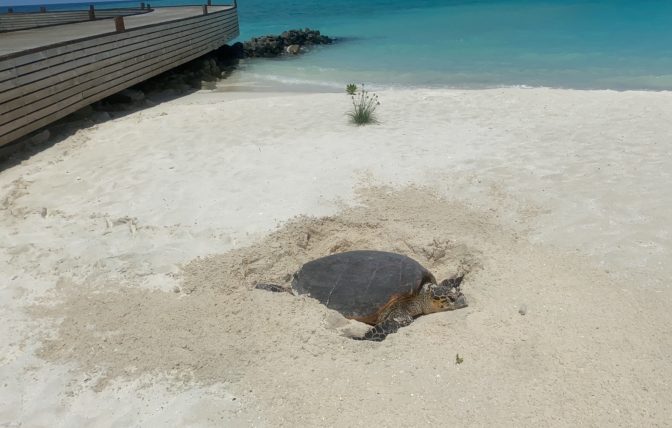 In the early morning of April 23, Grand Park Kodhipparu, Maldives was visited by a very special guest; a female Hawksbill Sea Turtle looking for a suitable nesting site to lay her eggs.

The resort informs that they are delighted to have been able to witness such an important event. “Hawksbill Sea Turtles are a critically endangered species and our staff has kept a proper safety distance without disturbing the long nesting procedure and pictures were taken without flash. After the sea turtle had left our beach, the nest was promptly secured and protected with a fence and a sign was placed close by to remind all to not disturb or touch the nesting ground,” a statement released by the resort read.

Based on reports from the resort’s marine biologists and professional divers stationed around the Maldives, the Hawksbill is the most commonly encountered sea turtle species in the water, however the number of hawksbill turtles nesting in the Maldives appears to be much lower than the number of nesting Green Sea Turtles.

We had a very special guest visit us the other day. Our first Hawksbill Sea Turtle found a comfy nesting ground @grandparkkodhipparu .The Hawksbill Sea Turtle is sadly endangered and we are thrilled to offer a sanctuary for her eggs. They say every two to five years, female Hawksbills return to the same beach where they were born to nest close to the shore. Stay tuned to our page in 60 days the young ones are to hatch. #nature #marinelife #seaturtle #maldivestrip #maldives #luxuryresort #resort #travelphotography #maldivesbeach #maldivesmania #islandlife #sanctuary #travel&leisure #turtle #greenglobe #sweetescape #visitmaldiveslater #dreamnowtravellater #staysafe #indianocean #instagood #instamoment #discoverparadise #paradise #summer #vacation #instatravel #instadaily

Hawksbill Sea Turtles reach sexual maturity at around 30 years of age and lays an average of 160 eggs in each nest that take about 60 days to hatch. Follow Grand Park Kodhipparu, Maldives on Instagram @grandparkkpdhipparu for more updates.

Interestingly, every two to three years, female Hawksbill Sea Turtles return to the same location on the very same beaches where they themselves hatched, referred to as natal beaches to lay their own eggs. A female doesn’t reproduce every year, but will make 2-5 nests every 2-4 years, making it extra special for Grand Park Kodhipparu, Maldives to be a sanctuary for a new generation of Hawksbill Sea Turtles in North Malé Atoll, Maldives.

Raffaele Solferino, the General Manager of Grand Park Kodhipparu, Maldives says;” We look forward to welcoming our first sea turtle hatchlings by the end of June at Grand Park Kodhipparu, Maldives. This event rewards the extraordinary efforts of our green team members who are daily processing environmental activities, keeping our reefs and shores safe and clean, as well promoting sustainable educational modules to both guests and staff”.