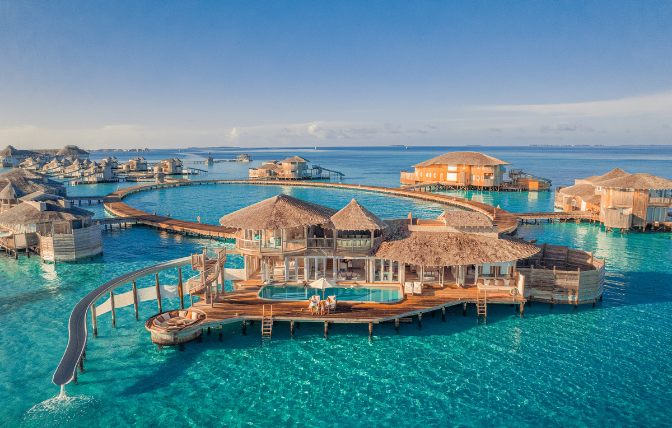 Enjoy an Unforgettable October in the Maldives with Soneva

Pioneering hospitality group Soneva has announced its spectacular October programme across its award-winning resorts. At Soneva Fushi and Soneva Jani in the Maldives, the exceptional holiday line-up is designed to delight guests of all ages – with one-of-a-kind family experiences, Michelin-starred guest chefs, rejuvenating wellness treatments, and a star-studded line-up of visiting experts through the ever-evolving Soneva Stars calendar. As part of their dazzling October programmes, Soneva Fushi and Soneva Jani will also be celebrating 2022’s Diwali with unique festival of light-themed experiences for the whole family and special guest appearances – including renowned ‘curry queen’ Dipna Anand.

Guests at Soneva Fushi this summer can dine with six exceptional visiting chefs from around the world as part of the Soneva Stars roster. German chef Sascha Stemberg has been at the helm of his family’s Michelin-starred Haus Stemberg in Velbert, Germany, since 2015. Winner of the 2013 World Sushi Cup and ‘World’s Most Creative Sushi Master’, Pepi Aneveski, will be showcasing his refined sushi mastery. Curry queen of the Indian cookery world and co-owner of the famous Brilliant Restaurant in West London’s Southall, Dipna Anand will be showcasing some of her grandfather’s Punjabi recipes during unforgettable Diwali dinners. Lisa Goodwin-Allen is the executive chef of the Michelin-starred Northcote restaurant in Lancashire, England, while Chantelle Nicholson is one of the leading female voices in the UK’s hospitality industry. And Viktor Beley, brand chef of Moscow’s Uhvat restaurant, will be showcasing his original interpretation of traditional Russian cuisine.

In the realm of sports and fitness, six-time NFL Pro-Bowl player Terrel Owens will be hosting a series of workshops for Young Sonevians. Former English professional rugby player Ben Cohen and his wife Kristina Rihanoff, a world finalist professional ballroom dancer, instructor, choreographer and author, will be helping guests stay in shape with their renowned fitness programmes. The man behind the global fitness brand The Body Coach and ‘The Body Coach TV’ YouTube channel, Joe Wicks will be conducting workshops and training sessions for guests. Todd Woodbridge is best known as one of the world’s greatest doubles players in history, while Brazilian former professional footballer ‘Naldo’ was named the best Bundesliga player in 2017 and was the first defender in Bundesliga history to top this category. And Olympic Swedish swimmer 3 Therese Alshammar will be helping Young Sonevians perfect their stroke while having fun in the water.

With more than two decades’ experience as a fitness coach and therapeutic masseur, life-long ultra-endurance athlete Eduardo Sierra will be approaching acute and chronic pain conditions from a multifaceted toolbox combining acupuncture, soft tissue work, osteopathy and the latest functional neurology research at Soneva Soul. And at Soneva Fushi’s island observatory, guests can take a fascinating voyage across the heavens with visiting astronomer Dr James O’Donoghue. A planetary astronomer at the Japanese Aerospace Exploration Agency (JAXA), he’ll be hosting after-dinner stargazing sessions along with fascinating talks about astronomy throughout the day.

The Den at Soneva Fushi also has a fun-packed programme daily of experiences and activities for younger guests, including eco-friendly arts and crafts workshops, a range of water sports, DJing and mocktail-making classes for teens, movie nights and stargazing workshops, as well as special cooking classes for Diwali celebrations. Older children are also invited to connect with the world around them with the Soneva Academy’s immersive modular courses, from exploring the stars to learning about sustainability and the Maldives’ marine realm.

Soneva’s exceptional line-up of visiting chefs will also be going to Soneva Jani in the Maldives’ Noonu Atoll. Sascha Stemberg, Pepi Aneveski, Dipna Anand, Lisa GoodwinAllen, Chantelle Nicholson and Viktor Beley will all be hosting exclusive dinners at the 4 resort, including at So Engaging, the intimate chef’s table that seats just five guests. Other unforgettable dining experiences during the October calendar include a Champagne sunrise breakfast on the sands of North Beach and a selection of succulent crabs and seafood at our award-winning, open-aired Crab Shack. A mouthwatering selection of themed dinners showcasing the continent’s eclectic cuisine can be found at Asian Kitchen, while diners can explore the heavens with astronomer Dr James O’Donoghue at So Starstruck, the Maldives’ only overwater telescope. A special Diwali celebration dinner with live entertainment will also be taking place on Soneva Jani’s South Beach during the festival of lights.

At Soneva Soul, visiting therapist and clinical chiro practitioner Dr Chet Collins, whose record for relieving and correcting persistent physical pain has resulted in an international reputation as ‘Dr Magic Hands’, will be helping guests find immediate relief and long-term solutions for their physical needs through a range of treatments. Guests can also join Soneva Jani’s own yoga and meditation masters, Justin and Kamal, for yoga and meditation sessions and learn how to enhance overall wellbeing, stretch and strengthen the body, focus the mind and balance emotions.

The playful escapism of Soneva Jani’s luxurious 5.6-kilometre lagoon makes the resort irresistible to experience seekers. A range of complimentary non-motorised water sports, including kayaking, stand-up paddleboarding and snorkelling at the house reef are on offer. Or experience the ocean with complete freedom with some of the latest motorised tech, including eSurfboards and Flyboards, and learn to move through the water like a fish, on the surface and beneath the waves.

A haven for families, The Den at Soneva Jani features a daily roster of exciting, educational and engaging opportunities for both young children and teenagers to 5 create meaningful moments at the barefoot hideaway. Inspired by childhood wonder, The Den is a two-storey awe-inspiring playground for the imagination – and now one of the largest children’s clubs in Asia. Featuring a zipline through a cascading waterfall; areas for music, Lego, dressing up and creativity; a soothing sensory room for toddlers and a hidden hangout for teens where mocktails and music set the scene; plus so much more – there’s something for all Young Sonevians, both large and small. Older children and teens can also join the Soneva Academy, which takes learning outside of the classroom with a selection of fascinating immersive courses, including the Marine Life of the Maldives, Mosquitoes and the Adventure of the Corbin, which follows the voyage of an ancient treasure galleon.