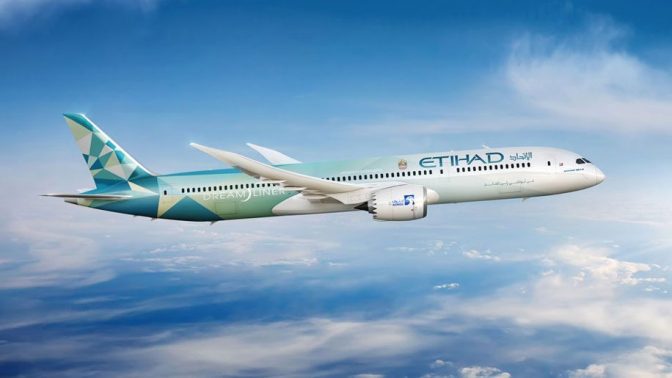 Etihad partners with Boeing for B787 ‘Greenliner’

Boeing and Etihad have teamed up to build and operate a very unique Boeing 787, one that is designed to test new green technologies. The ‘Greenliner’ will be created to operate as environmentally as possible, as announced at the Dubai Air Show.

The aircraft – which will sport a special green/blue livery – will enter service early next year, and will operate a special “eco-flight” between Abu Dhabi and Brussels during Abu Dhabi Sustainability Week (which runs from January 11 to January 18, 2020).

Etihad said that the flight would incorporate “a wide range of environment-focused initiatives”, and commenting on the special livery Tony Douglas, group chief executive officer of the Etihad Aviation Group, said:

“The graduated blue tones of this design represent the importance of water in Arabic life and culture and symbolize the ‘blue sky’ thinking needed to deliver practical, incremental initiatives to progressively lower fuel consumption and carbon emissions.”

Boeing said that the partnership will see the Greenliner aircraft “periodically serving as a testbed for assessing environmental sustainability initiatives”.

The two groups said they had signed “a comprehensive agreement through which the companies will share knowledge, experience, and resources to continuously improve the Boeing 787 Dreamliner, and reduce aircraft carbon emissions, a major challenge across many industries today”.

Etihad operates more Dreamliners than any other Middle Eastern carrier, with the aircraft comprising a third of the airline’s fleet, with plans to increase this to 50 percent by 2023.

The two companies said that they have committed “to build upon the significant technical capabilities which Etihad has developed to support both its own 787 Dreamliners, and those of a growing number of other operators, as well as engineer exchanges with a focus on further developing the skills and experience of UAE nationals”.

“These agreements complement our wider partnership and support future collaboration between Etihad and Boeing on supply chain management and both line and predictive maintenance, further reinforcing the airline’s commitment to reliability.

”They also strengthen Abu Dhabi’s credentials as a global innovation hub, a key pillar of the Emirate’s 2030 economic and social vision.

“As a next step, Etihad and Boeing will explore partnerships with universities in both Abu Dhabi and Seattle, home to Boeing’s largest assembly facilities, to further increase capabilities that support the development of the aerospace sector in Abu Dhabi, and elsewhere in the UAE.”