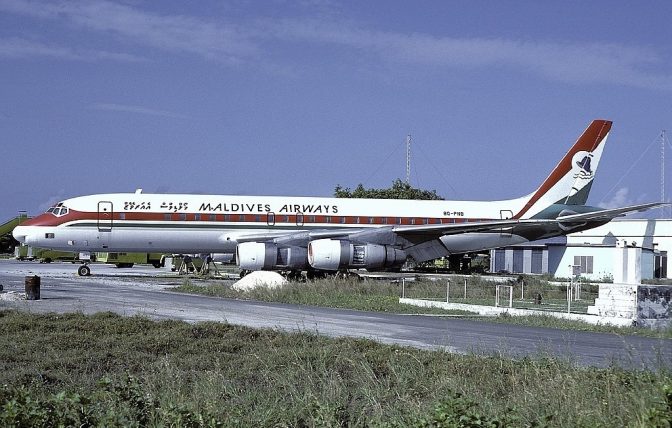 Evolution of Airline Industry in Maldives

For most of the small island states, depending on tourism to drive their economies are typical. However, to roll it and the rest, one has to depend on network and connectivity and no one can do that job better than airlines.

Since the first commercial flight to the Maldives in 1962, airline operation in the Maldives has grown significantly over the years. In 1960s, with just few charter carriers, Maldives was only linked to Sri Lanka, India and few destinations in Europe via Middle East. Rolling forward to 2020, the country is now connected to 40 destinations in 23 countries. Maldives receives regular air services from 35 schedule and charter carriers. Today, Maldives have 32 Air Service Agreements (ASA) in its jar and another 16 MOUs signed with different states across the world. Maldives have witnessed over 57,000 flight movements in the first 11 months of 2019 along with over 4.8 million passengers travelling on those movements. An industry which represents approximately 5% of the country’s GDP with tremendous potentials and opportunities, cannot be neglected and desperately needs more attention from the respected authorities.

Evolution of Airline activities in the Maldives.

With the opening of the Hulhule International Airport (Velana International Airport) in 1960, under the visionary leadership of the back then president of the Maldives, Mr. Ibrahim Nasir, launched the first international airline of the Maldives in 1974 as “Air Maldives”. The carrier was a key catalyst in the early days of the Maldives tourism growth. Air Maldives’s flew to 11 international routes on a decent fleet including the early versions of Airbus A300 and A310 before it found its fate in insolvency in the year 2000 due to financial difficulties. With the Air Maldives bankruptcy, the government took countermeasure with another establishment named “Island Aviation Services” in 1998. The airline had the former Air Maldives Donier 228 fleet and Bombardier Dash series. In the year 2009, it was rebranded as “Maldivian” and was honored with the National carrier status. Maldivian launched international flights in 2012 using a fleet of two Airbus narrow bodies. The national carrier expanded their operation by entering into the competitive seaplane market in 2013. As the national airline, it operates to all the domestic airports in the country and has announced plans to enter into the ultra-long haul game using Airbus A330s. Maldivian dominates the domestic market with a comfortable 46% of the market share. It carried over 957,000 passengers on over 40,000 flight movements in 2018 as per the figures released by the Maldives Civil Aviation Authority.

In the initial days of tourism, passenger transfers by air to the island resorts were carried using helicopters. “Hummingbird Helicopter” was established in 1989 and it gave a glimpse of an alternative resort transfer solution to the hotel operators compare to the poorly laid sea transport network. However, the operation lived short due to a devastating accident in 1994.

Established in 1993, Maldivian Air Taxi (MAT) was the one who championed seaplane (Float) operation using Canada’s De’ Havilland manufactured Twin Otters. The aircraft have a proven track record of been the friendliest aircraft in the Maldivian skies. Hummingbird Helicopters rebranded in 2000 as Trans Maldivian Airways (TMA) also acquired a fleet of Twin Otters to turnaround their struggling operation. TMA introduced domestic wheel base operation in the year 2007 using French manufactured ATR aircraft. It then took the industry by a surprise when they announced the suspension of the wheel base operation in 2009. Together, MAT and TMA made the biggest seaplane operation in the world. The real twist in seaplane operation took off in 2013, when American based equity firm, “Blackstone” bought the majority stake of both TMA and MAT. Blackstone consolidated the operation and a seaplane monopoly was restored in the Maldives for a fortnight. The brand, Maldivian Air Taxi was abandoned. Blackstone sold their share in TMA in 2017 to US based investment firm, Bain Capital. TMA holds approximately a decent 40% of the total resort transfer market in the Maldives with an annual passenger number of over 800,000 on 87,000 flight movements as per the figures released from Maldives Civil Aviation Authority.

One that made the most prominent headlines in the past decade was the launch of the Mega Maldives Airlines. An international carrier which emphasized on holiday charters and schedule operation in Asia. Mega’s main operation was out of mainland China and Hong Kong. It also operated to India, Sri Lanka, Malaysia and carried pilgrim charter traffic between Saudi Arabia and the Maldives. At its peak, mega operated 5 aircraft in its fleet, a mix of both wide body and narrow body aircraft all from Boeing. Mega Maldives held a market share of over 45% of total Chinese inbound traffic to the Maldives in its heydays. Before it filed for liquidation in the second quarter of 2017, the carrier had plans to introduce flights to South Africa and Europe.

Villa Air was launched in 2011 as the first privately owned sole domestic wheel base operator under the brand “Flyme”. Under the visionary leadership of the Villa group founder and renowned business tycoon, Mr. Gasim Ibrahim, the group also developed the county’s first privately owned airport in 2011. The airline expanded rigorously in its initial days before scaling back the operation due to political instabilities in 2015. Villa Air currently operates a mix fleet of 4 ATR to 2 domestic destinations. The airline has also announced the interest in entering into the competitive seaplane market in the Maldives. Flyme currently holds 16% of the market share. The airline carried over 333,000 passengers and had a flight movement over 7700 in 2018.

The youngest airline, Manta Air, started it’s operations in 2019. The airline was founded in 2016 as a joint venture between Deep Blue Pvt Ltd, a local company with multiple investments in the tourism sector, and Umar Mohamed Manik. The company was created to cater to the need for more air transportation options and to support the rapid development of domestic airports and the fast-paced expansion of the resort and guesthouse market across the country. The airline currently operates 3 brand new ATR 72-600’s, currently flying to three domestic destinations. The airline also started its seaplane operations within the same year with 7 DHC6 Twin Otters.

A glimpse on foreign carriers and the market

Maldives welcomed a record 1.7 million tourists in 2019. With over 49,000 active beds at the end of 2019 and with an average stay of 6.3 nights, bed capacity grew 13% compare to last year’s same period – figures released by tourism ministry shows. However, the hotel’s occupancy rate in the Maldives have averaged at 62.3 percent throughout 2019. In late 2018, the tourism minister briefed that 144 hotel projects are ongoing in the award winning island nation. On the other hand, the tourist arrivals to the Maldives has rested approximately at annual 7% increment in the past 5 years. This clearly indicates that Maldives tourism industry have an oversupplied bed capacity condition which is not healthy to any given stakeholders. Definitely a positive contribution for the aforementioned problem can be found through international airlines. Whether it be local grown or foreign registered carriers.

Maldives is already a well-served market by multiple foreign carriers. All the big hub & spoke legacy airlines in the Asia and Middle East has its route networks expanded into the Maldives. Singapore Airlines, Cathay Pacific, Qatar Airways, Etihad, Emirates has multiple daily frequencies to the Maldives and provide hassle free one-stop connections from around the world. Some of the early international carriers who served to the Maldives are still seen in today’s operating environment. Renowned German charter carrier – Condor, Dubai’s flag carrier – Emirates, Sri Lanka’s national carrier – Sri Lankan airlines (Air Ceylon) are few examples. Emirates began its services to the Maldives in 1987 with just a weekly frequency. Today, Emirates is the de-facto national carrier of the Maldives with 5 daily frequencies using all wide body aircraft. Emirates lead the market by carrying the highest number of passenger to and from the Maldives with over 718,000 passengers in 2018 alone.

Maldives found total 8 airlines in defunct conditions in its history, mainly through insolvencies and mergers & acquisitions waves. Given the size of the market (especially domestic), regulatory hurdles, inadequate infrastructure and lack of professionals in the airline industry, carriers were and are consistently set on roller-coasters in the past three decades. Some of the challenges have been addressed at national level and disappointingly only few solutions are been exercised. For example, the government of the Maldives is in the middle of a series of domestic airport development era to tackle the isolation issues in the very rural areas of the country which definitely will bring social and economic benefits. However, the question of operating all these airports on economic and environmental sustainability remains. More importantly, with the given current market conditions, the economic feasibility of the existing carriers also remains very gloomy. Looking into a more serious issue, a congested international gateway that the airline community frustratingly have been living with for ages still remains unanswered and it keeps continuously putting challenges to the airlines serving it. The aviation industry in the Maldives, desperately is in need to overcome all the aforementioned challenges to develop the networks and connect the beautiful tiny gems within it further with the rest of the world and liberalize its bilateral ties deeper.

Mohamed Rishan holds a Bachelor’s Degree (Hons) in Aviation Management from the University of Kuala Lumpur. He was the Route Revenue Analyst at Mega Maldives Airlines. He also served as an Assistant Manager of Network Planning & Revenue of Villa Air. Rishan, regularly teaches aviation and other subjects in local institutes. He is currently a postgraduate student in Master of Science in Aviation at RMIT University Australia.