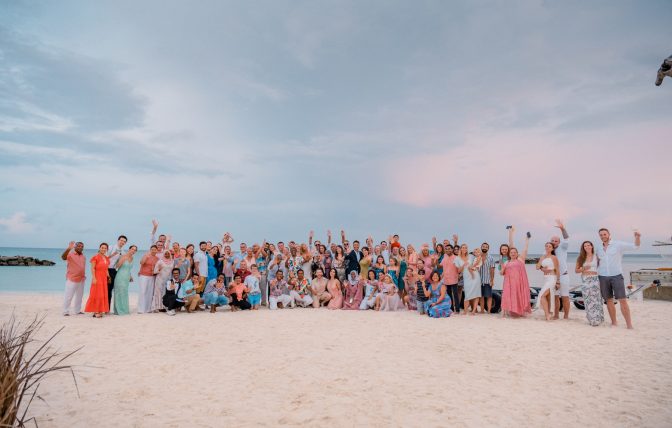 Fushifaru Maldives, 63-villa boutique resort, celebrated five years of operation with “Fabulous #5” theme with a bang on 24th of October 2022. Since the resort first opened its door in October of 2017, the resort has attained its leading positioning as a true and authentic Maldivian resort with genuine hospitality.

To commemorate the remarkable occasion, the resort curated seven days of fabulous celebrations starting with a series of sports activities held at its own private sandbank, which is the largest in Lhaviyani atoll. The tournament was inaugurated by Mr Mohammed Rasheed, 5 km national record holder in Maldives. One evening showcased the island nation’s rich culture and traditions from music and dance with the vibrant beat of Boduberu drums to an artistic exhibition of local delicacies from different islands of Maldives.

The grand celebration kicked off in the afternoon of the anniversary day with a lavish cocktail reception followed by a fashion show where guests playfully walked the runway as models. The best dressed couple was awarded with an all-inclusive 5-night stay for a return visit. Everyone was serenaded with a special solo performance by Mr Patrick Roberts, the world-renowned award-winning violinist, with the mesmerizing sunset in backdrop. A gala dinner welcomes each guest with an extensive buffet and live cooking stations offering popular local and international dishes at Korakali restaurant. The anniversary event concluded with live music and a DJ along with surprise lucky draws of some exciting prizes handed to guests.

The celebration continued on with celebrity Chef Elvedin Odobasic delighting guests with gastronomic experiences offered in iconic locations of the resort, including the much-anticipated exclusive dinner at award-winning Raakani restaurant, and an interactive homemade pasta making class on Korakali beach where guests were given the opportunity to learn some cooking tips and tasted delectable kinds of pasta personally made by the special guest chef.

“The success of the resort lies in our people who are dedicated and go above and beyond as well as our partners who continuously support us. Providing fantastic accommodation matched with genuine Maldivian hospitality and sustainable tourism is our everyday commitment”, quotes Ahmed Siaar, the General Manager of Fushifaru Maldives.

These are the guiding principles behind the imaginative cuisine of Elvedin Odobasic – Executive Chef from Hotel Gstaaderhof, a family owned hotel in the Swiss Alps of Gstaad. Born in Bosnia & Herzegovina, Elvedin moved to Switzerland in 1993 and found his creative niche in cooking alongside his mother as a child. This led him to complete his Master Chef qualifications in Hotel & Gastro formation Schweiz and pursue his dream of becoming an Executive Chef. His experiences with working with a 1* Michelin chef at Le Grand Bellevue in Gstaad gave him the opportunity to participate as a guest chef at the Saveur Gstaad event.

In 2009, Elvedin took over the kitchen at Hotel Gstaaderhof where he elevated the cuisine to its current state earning 14 Gault Milau points for Restaurant Müli. His menus are seasonal and use what is locally grown and raised in nearby Swiss alpine regions. Elvedin’s cuisine is based on down-to-earth simplicity of sourcing and foraging fresh mushrooms from the Alpine mountains, plants and wild berries.

He is excited to share his passion for pairing delicious food and wine with the guests from Fushifaru for the ‘Fabulous 5’ anniversary event. His love for food and a real appreciation for freshly grown produce, combined with his desire to share it with others is the foundation of good food.

Patrick Roberts has been performing globally for over 30 years. Picking up the Violin at the tender age of 5, he has been classified as a true Violin genius and has transformed some of the much loved classics into contemporary masterpieces. Patrick has performed shows all around the world and has featured his own headline shows throughout mainland China, Japan, USA, Australia & Europe whilst mesmerising audiences far and wide with his emotional & evocative performance style. Coupled with his live performance schedule he has also released 8 albums to date, received two Gold records and had three No.1 albums in the charts globally. Patrick has collaborated with some of the world’s most incredible artists and orchestras such as Sting, Air Supply, Tommy Emmanuel, Nuno Bettencourt, Julian Lennon, The Carpenters, Joshua Bell, The Prague Symphony Orchestra & the Melbourne Symphony Orchestra.

In 2015 Patrick was signed to Sony Music Australia and released his debut album with them titled ‘Pink’ which featured serene, uplifting classical / crossover masterpieces tailored to a wider demographic. Proceeds of the album went to the National Breast Cancer Foundation to help life changing Breast Cancer Research. Patrick’s Mother was a Breast Cancer survivor and he created the album in her honour. The album featured songs such as Intermezzo, Cinema Paradiso, La Vie en Rose, & You’ll Never Walk Alone . ‘Pink’ debuted at No.1 on the Classical / Crossover charts and then went on to turn Gold. Patrick has performed on every major TV station in Australia and is widely known as an Australian TV phenomenon. He is most remembered by his performances each year live on the Good Friday Appeal on Network 7 in support of the Royal Children’s Hospital, Vision Australia’s Carols By Candlelight in support of the blind and vision impaired and the National Breast Cancer Foundation.

In 2018 Patrick collaborated with Graham Russell and Russell Hitchcock from Air Supply on their latest album titled The Lost in Love Experience. This was a very exciting collaboration for Patrick as he performed solo alongside Joshua Bell, Tommy Emmanuel & the Prague Symphony Orchestra. In 2019 Patrick signed to Universal Music and released his 6th studio album titled ‘All Out of Love’. This new album featured Graham Russell and Russell Hitchcock from Air Supply as guest artists & The Prague Symphony Orchestra on the album. ‘All Out of Love’ debuted at No.1 on the classical/ crossover charts.

Patrick launched the new album at the iconic Sydney Opera House alongside Air Supply & the Metropolitan Orchestra in front of a capacity 5,500 audience, this was straight after his live performance with them at the Melbourne Plenary in April 2019. He is very honoured to have these legendary artists on his album ‘All Out of Love’ and also have performed alongside them at the Sydney Opera House in 2019.

In May 2019 Patrick made his debut performance in Las Vegas at the stunning Orleans Showroom as special guest during Air Supply’s USA tour. The USA audiences truly embraced Patrick’s very emotional and mesmerizing performance style and he will be returning again next year for a full USA tour.

In 2020 Patrick was honoured to release his 7th studio album with Sony Music titled ‘Imagine’ featuring Julian Lennon & Tommy Emmanuel. The album debuted at No.1 on the Classical / Crossover charts. ‘Imagine’ features many of the Beatles classic songs reimagined on the Violin and was mastered at the iconic Abbey Road Studios in London by the amazing Andy Walter who mastered the original Beatles Anthology Edition giving the last sprinkles of magic to an already impressive album. Patrick donated proceeds of ‘Imagine’ to the Sony Foundation & the White Feather Foundation to help their mission for the conservation of life.

This year marks a very special year for Patrick as he has signed to Decca Records and announced the release of his brand new album ‘Fragile’ featuring Sting and Tommy Emmanuel. With its collection of the world’s most beloved songs, Fragile mirrors the incredible journey of the human spirit. The album features a special version of Sting’s song ‘Fragile’ featuring the 17-time Grammy® Award winner Sting and legendary Australian guitarist Tommy Emmanuel. 50% of the proceeds of this album will go to the Rainforest Fund, which was co-founded by Sting and his wife, Trudie Styler, to help their mission in reducing mass global deforestation. This is also Patrick’s debut album on Decca Records. Patrick’s recent signing with Universal Music Australia sees him join a stellar roster of Australian and international artists including The Seekers, Patrizio Buanne, Ludovico Einaudi, The Lumineers, Ennio Morricone and Andrea Bocelli.

In June this year Patrick was invited to perform ‘Fragile’ live with Sting at the beautiful Chateau de Chambord in France in front of a 18,000 capacity audience. The show was also filmed for a global video release of Sting’s My Songs Tour and performance at Chateau de Chambord.