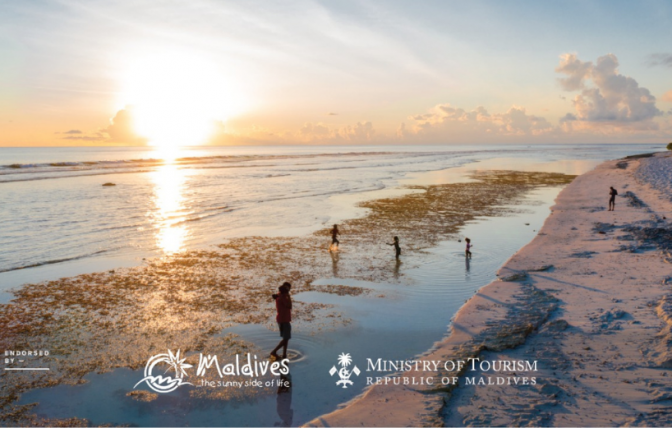 Situated between 0 degrees 17 minutes south latitude and on the meridian 73 degrees 22.5 minutes and 73 degrees 25 minutes, this lonely miniature island atoll of Maldive group, one of many “summer isles of Eden lying in the dark-purple sphere of the sea”, is by Maldivians themselves, justly considered to be the most beautiful, and most favored by nature of all islands in the extensive Archipelago.

The description above is how HCP Bell introduced Fuvahmulah almost 100 years ago. It might have been a hundred years ago but the portrayal of life on the island provokes heartwarming thoughts. Bell saw a happy people. They welcomed outsiders and treated them with love and respect. They were self-sufficient, growing their own crops. Fruits were in abundance. The folks who lived on this island travelled to Ceylon and there was regular trade between them. They were industrious and innovative. Bell writes about seeing bars of soap that were marked ΄made in Fuvahmulah΄. Bell describes a thriving, vibrant community.

Go back a few centuries and a similar picture emerges through the diary of two French sailors, brothers Raul and Jean Parmentier. Jean Parmentier was a navigator, mapmaker and poet. Together with his brother Raoul, the Parmentiers were prolific voyagers and in 1529 AD they sailed to sailed to Sumatra in two separate ships, the Pensee and the Sacre. The ships travelled across the equator and they mention of a single island in the middle of the ocean.

They wrote, “At length we found one green island, well planted with palms, about a league in length. Jean Masson in our little boat went ashore; as did also the boat of the Sacre. The people of the island gave them a good reception and presented some of their palm fruits and long figs, while the sailors gave them some knives, mirrors and other wares. They also gave him, as present for the captain, a little chain artificially made of a single piece, which was bent double, and also sent the captain between two leaves, about two or three pounds of sugar candy (probably fukkaro) and a quarter or a half hundreds of balls of thick black sugar.” That was the account of the first landing.

Fuvahmulah may have remained very much disconnected from the rest of the world for a long time but today, visiting the island is easy. The national flag carrier, Maldivian runs regular scheduled flights between Male and Fuvahmulah and there are a number of accommodation providers and restaurants on the island. It is a budding tourist attraction with a reputation for great tiger shark dives.

Many things that makes Fuvahmulah stand out are geophysical in nature. These are still very much intact for visitors to see and experience. The following are some of the salient natural and manmade features of the island that a visitor may wish to explore.

Bandaara kilhi and dhadimagi kilhi – these are two substantial bodies of water with picturesque reed fields surrounding them. Visitors can explore these areas and go canoeing or SUP-ing in the waters.

This beach is unique because of the pearly white pebbles that stretch for up to a kilometer at certain times of the year along the island’s North West shore. This beach is dynamic – it changes shape and moves along the coast with the change of monsoons.

Thoondu is also establishing itself as a popular surf point – named by the local youth as “Eley’i”.

The reef and ocean surrounding Fuvahmulah is ideal for a number of pelagic fish which includes tiger sharks. Whether you are an experienced diver or a novice snorkeler, there are plenty of opportunities in Fuvahmulah to feed your curiosity.

Fuvahmulah is the biggest supplier of taro in the local market and visitors can enjoy broad vistas of green taro plantations at various parts of the island. The island is also known for the high number of mango trees on the island. In the past, most houses had more than one mango tree and in the season, mangoes from Fuvahmulah becomes a popular item in the market for local produce.

There is also a lot of preserved history dotted across the island. Ruins of Buddhist monasteries (haviththa, Vasho veu, Geh miskithe veu), ritual baths, and old mosques bear testimony to the skillful people who lived on this island.

As it is one of the largest islands in the archipelago, there is ample ground for environmental enthusiasts to explore. Hiking or nature walks can be a great activity while you are there. Also, local cuisine, especially the local delicacy kattelhi (snake mackerel) – with pulverized taro and scraped coconut – is a must-try dish.

Today, due to the island’s unique geography and the richness of flora and fauna, the entire island of Fuvahmulah and the surrounding marine environment are listed as a biosphere reserve and protected by UNESCO.

About the author: Hassan Saeed is a hotelier with over 28 years of experience in Maldives tourism and resort operations. He is passionate about behavioral economics and how concepts like ‘Nudge’ can be applied in service settings. Hassan identifies himself as a lifelong learner. He currently holds the position of Resort Manager at Dhigali Maldives.