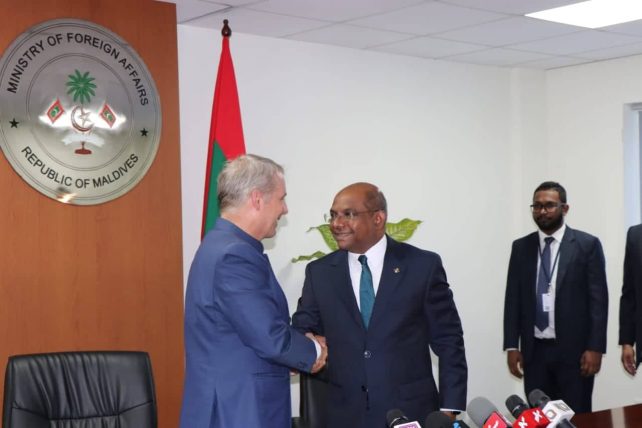 Speaking at the joint press conference by the Ministry of Foreign Affairs and the Ambassador of Germany this morning, Minister Abdulla Shahid has announced that German Schengen visa services will be available from the Maldives in March 2020.

The Minister highlighted the difficulty Maldivians face in trying to get visa waiver for European countries by traveling to either Delhi, India or Colombo, Sri Lanka. So as to offer a better solution, the Ministry is working with the Germany government, European Union and the visa service provider VFS Global.

“Though we are initially starting the service from Germany, we are working to work with other European countries as well”, the Minister said. “The Maldives welcomes thousands of tourists each year and to ensure this we try to make the necessary arrangements. The tourists visiting the Maldives do get 30 days visa upon arrival even now.”

Maldivian citizens were able to get on-arrival visas for 84 countries including the UK. The government recently signed visa waiver agreements with the UAE, Russia, Morocco, and Thailand.

Though the Schengen visa will be available from March 2020, in order to aid the ITB participants from the Maldives, a temporary clinic will be operated from 3rd to 5th February as per the Germany ambassador and the Minister.

The Minister thanked the government of Germany for this service.