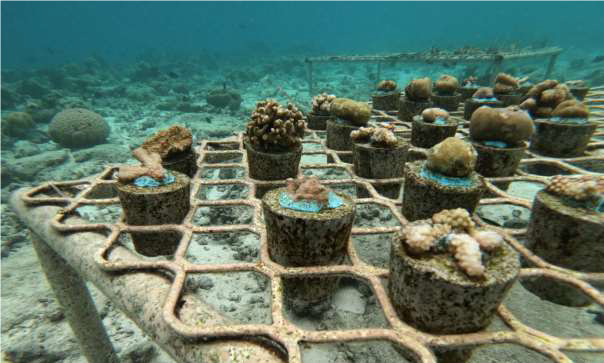 Over recent decades there have been increasing efforts at growing corals in processes variously termed coral ‘gardening’, ‘farming’, ‘propagation or ‘restoration’. These take advantage of the ability of coral colonies to grow attached to artificial solid structures. Since its opening in 2017, Grand Park Kodhipparu, Maldives has established several coral gardening projects, where coral pieces from the House Reef are attached to purposely built an underwater structure. 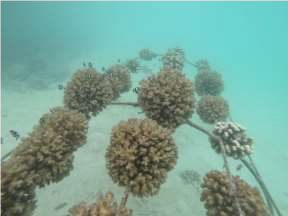 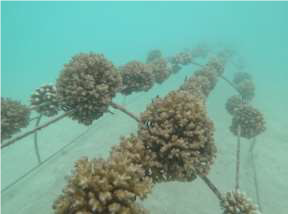 In fact, one of the first sights many guests see when first arriving at the resort is an artificial reef installed below the reception deck. This tunnel-shaped metal frame had several small pieces of coral attached to it during the first year of hotel operations and is now attracting additional marine life such as juvenile fishes with the growth of these into larger colonies, some of which are already around twenty centimeters in diameter.

While this serves to create new marine habitats in the arrival marina area, the resort has also installed coral ‘nurseries’ in areas of its natural House Reef. The largest of these is a mid-water rope nursery in deeper water near to the overwater villas and containing 100 pieces of attached corals, built up over 2019. Rope nurseries effectively lift attached coral pieces to grow several feet off the sea bottom, away from fine sand and competitor organisms that might normally prevent their optimal growth and survival. 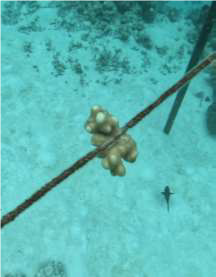 Resident Marine Biologist at Grand Park Kodhipparu, Peter Pringle, explained “Many coral nurseries use fragments taken from colonies living on the reef, removed from the ‘donor’ colony and attached in a different area to grow into a new colony (similar to how cuttings are used to propagate plants). However, as Maldives’ reefs are still recovering from mass coral die-offs experienced in recent marine heatwaves, we prefer to leave the surviving colonies on the reef completely intact. We instead use fragments broken off by strong waves, the feeding activities of marine animals or other actions. Collecting such “corals of opportunity” enhances each one’s long-term survival prospects – removing it from where it might be covered by sand and die, to the mid-water rope nursery”. 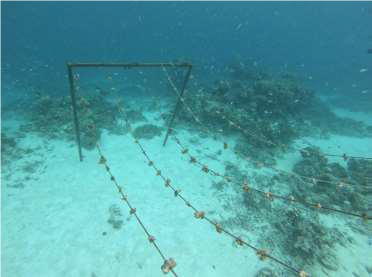 A different style of nursery, consisting of frames holding coral fragments attached to cement pieces, has recently been established and allows guests to actively participate in coral gardening. Coral fragments are attached to cone-shaped cement pieces above water using underwater glue, with participants then able to swim their ‘baby coral’ out from shore to place it in the nursery. According to Peter, this activity “also has an educational benefit, as participants can better understand how coral colonies live and grow from the physical action of planting a coral, something not always easy to explain using only diagrams and pictures”.

Ultimately, after several years’ growth in the nursery environment, the reverse of the nursery creation process can establish these colonies in other areas, in a process similar to planting trees in landscaping. While coral gardening is certainly not a replacement for conservation actions needed for the continued survival of coral reefs, such as reducing carbon emissions to lessen climate change effects and improving water quality, it is constructive in increasing awareness of reef conservation and coral biology.