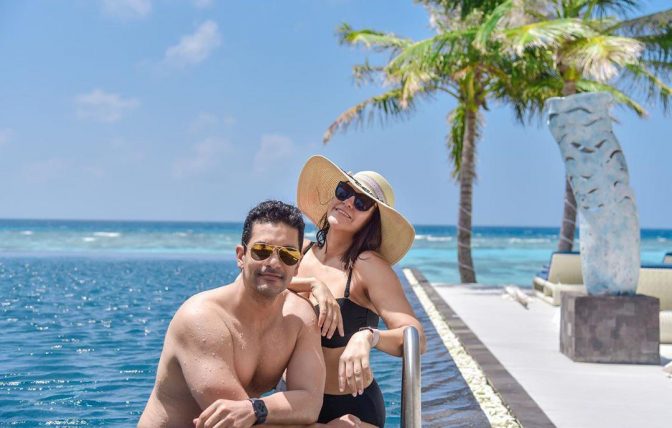 Bollywood couple Neha Dhupia and Angad Bedi is enjoying a family getaway with their daughter at Mövenpick Resort Kuredhivaru Maldives.

Both Neha and Angad have been sharing several posts on their social media accounts as they kickstarted their much-awaited vacation time. The couple decided to take a dip in the pool and bask in the sun in the beautiful tropical paradise.

Neha Dhupia is an Indian Actress and Model who works in Hindi, Punjabi, Telugu, Malayalam and Japanese films. She has won the Femina Miss India 2002 pageant and was among the top 10 finalists in Miss Universe. She has also been one of the leaders of MTV Roadies since Season 14.

Angad Singh Bedi is an Indian film actor and former model. He made his debut with Kaya Taran in 2004, an adaptation of a Malayalam short story by N. S. Madhavan, Vanmarangal Veezhumpol. He has done the film F.A.L.T.U in 2011 and known for his roles in Pink, Dear Zindagi and Tiger Zinda Hai.

Neha Dhupia and Angad Bedi got married in May, 2018. They have a little daughter named Mehr. Angad was recently featured in Gunjan Saxena: The Kargil Girl alongside Janhvi Kapoor. While Neha currently hosts talk show No Filter Neha.

Located only 45 minutes travel from Male’, Mövenpick Resort Kuredhivaru Maldives is a tropical oasis located in the undisturbed Noonu Atoll nestled in the northern part of Maldives.