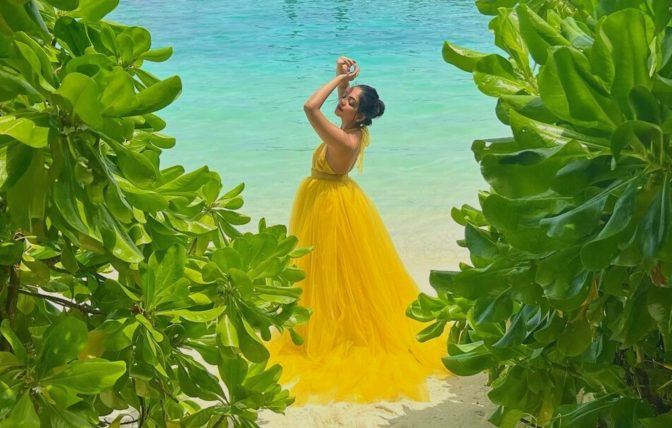 Ahaana Krishna is an Indian actress appearing primarily in Malayalam and ad films. She made her cinematic debut as the lead heroine in Rajeev Ravi’s Njan Steve Lopez in 2014 opposite Farhaan Faasil. Since then, she has starred in many productions such as Luca, Gangs of 18, Dots, and Pidikittapulli. This rising star is going places in her star journey but for now she has found herself in the tropical Maldives for some fun and relaxation.

The Indian actress proved to look so sensational as she modelled on the beach, as seen in her several posts on Instagram to give her fans all over the world a quick sneak peek into her latest vacation. In one of the many looks of Ahaana through her vacay snaps, she is seen decked up in a blue swimsuit with cut-out details, matching the blue ocean behind, with the colour blue ensemble, and teamed with a ring and nail paint. In another she looks absolutely stunning in her starry dress and the best look of all is Ahaana decked in a flowy yellow dress making her the belle of the ball while in looking simply breath-taking next to the natural beauty of the island.

The avid social media user has shared a few “Maldives Must-Do’s” with her fans in her stories. These experiences include enjoying to the fullest with having the most amazing food, watching sunsets and sunrises, snorkelling, and much more at her hideaway at Hideaway.

“Came back searching for a piece of my heart I left behind 2 years ago at this Paradise, also known as the Maldives,” the actress wrote in her Instagram caption. She has even posted a reel of channelling all her ‘Mermaid Dreams’ somewhere in the middle of an ocean whilst snorkelling through the unique double coral reefs of @hideawaybeachmaldives.