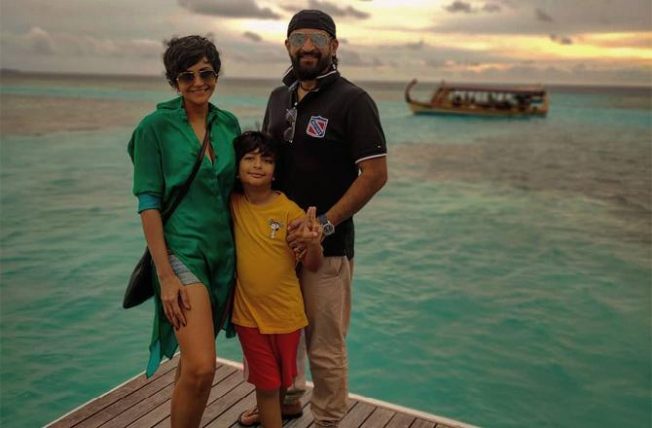 Indian Actress Mandira Bedi made memories in her ‘favorite’ travel destination, the Maldives. She vacationed at OZEN by Atmosphere at Maadhoo with her family – husband Raj Kaushal and son Vir.

Mandira Bedi is an Indian actress, fashion designer, and television presenter who gained celebrity status playing the title role in the 1994 television serial, Shanti, shown on India’s national channel, Doordarshan, which was the first-ever daily soap on Indian television.

She followed up her career in TV serials with shows like Aurat (DD and Sony), Dushman (DD) and Kyunki Saas Bhi Kabhi Bahu Thi (Star Plus) with hosting duties for ICC Cricket World Cups in the years 2003 and 2007 and the Champions Trophies in the years 2004 and 2006 as well as the Indian Premier League season 2 for Sony Max. She fronted the coverage of IPL season 3 for the British Network – ITV. She debuted as a fashion designer during Lakme Fashion Week 2014 with her saree collection.

Mandira was filling up her Instagram with envy-inducing moments. She captioned a collection of photos, in which she can be seen enjoying a cuppa in a bikini – as if she’s almost ready for a post-breakfast swim. Mandira Bedi’s smiles ear-to-ear in the photo perfectly sums up her vacation feels.