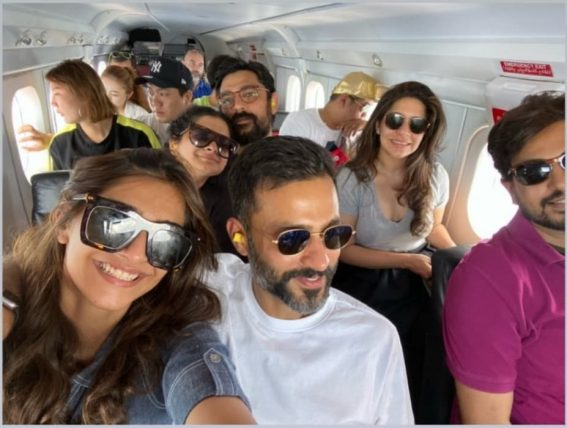 Actor Sonam Kapoor and her husband Anand Ahuja, along with producer Rhea Kapoor and her partner Karan Boolani, are on vacation together at Soneva Fushi.

Sisters Sonam Kapoor and Rhea Kapoor are on a couples vacation with Anand Ahuja and Karan Boolani and shared pictures on social media. The couples are holidaying in the Maldives at Soneva Fushi, going by the pictures shared on Instagram.

While Sonam and Anand tied the knot in 2018, Karan and Rhea have been reportedly dating for several years. Sonam told Filmfare in an interview that she didn’t believe in the concept of marriage before meeting Anand. She said, “My friends were trying to set me up with Anand’s best friend. That’s how I met him. The first time I met Anand was while I was busy with the promotions of Prem Ratan Dhan Payo.”

Sonam Kapoor received a National Film Award and a Filmfare Award, and from 2012–2016, she appeared in Forbes India’s Celebrity 100 list based on her income and popularity. Both Sonam Kapoor and Rhea Kapoor are daughters of Bollywood actor Anil Kapoor.