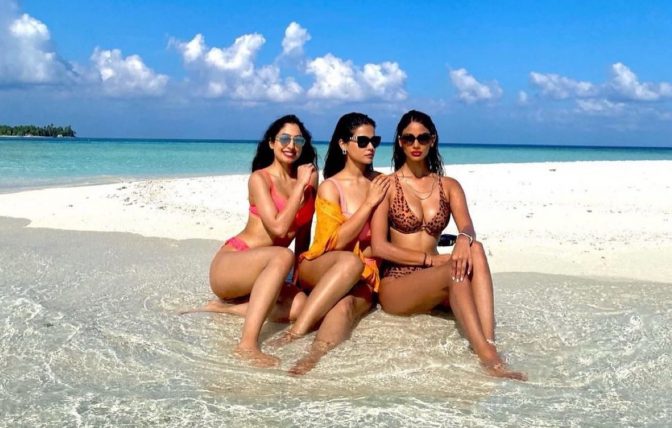 Sharmiela Mandre, the Indian actress and producer, along with actress and Miss Earth 2010 Nicole Faria and Shifa Jowar are enjoying some sun, sand and sea at Meeru Island Resort & Spa.

Sharmiela Mandre, the actress and producer, is well known for her works predominantly in Kannada cinema, as well as a few Telugu and Tamil movies. She made her debut in Telugu film industry in 2013 with a comedy movie Kevvu Keka.

Nicole Faria is an Indian actress, model and the winner of the Miss Earth 2010 pageant. She is the brand ambassador for various brands including Clean & Clear, a line of dermatology products owned by Johnson & Johnson and was the international brand ambassador for Swiss luxury wristwatches Frédérique Constant. She made her debut in the film industry with the movie Yaariyan.

On the work front, Sharmila Mandre has 3 movies which are are Dasara, Mysore Masala, and Gaalipata 2.

All three Indian beauties – Sharmila Mandre, Nicole Faria and Shifa Jowar slipped into bikinis while vacationing in Maldives. They have been sharing pictures of their getaway at Meeru Island Resort & Spa on their social media accounts.

Located in the North Male Atoll and accessible by a 55-minute speedboat ride from the Maldives main Velana International Airport, Meeru is one of the largest resorts in the Maldives, offering its guests a variety of facilities and affordable to superior accommodation.

With five types of room categories to offer, Meeru counts more than 280 rooms, five restaurants, five bars, a renowned spa featuring treatment rooms both overwater and on land, and a wide range of sports and other recreation facilities.