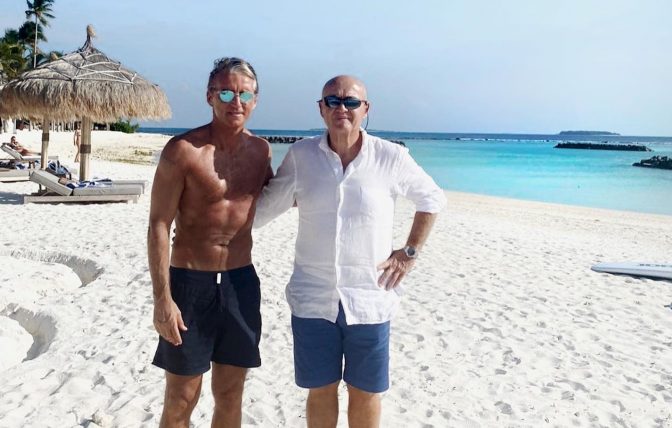 Former footballer and the current manager of the Italian national football team Roberto Mancini has spent his holidays at Emerald Maldives Resort & Spa.

As a player, Mancini operated as a deep-lying forward, and was best known for his time at Sampdoria, where he played more than 550 matches, and helped the team win the Series A league title, four Cuppa Italia titles, and the European Cup Winners’ Cup. He was capped 36 times for Italy, taking part at UEFA Euro 1988 and the 1990 FIFA World Cup, achieving semi-final finishes in both tournaments. In 1997, after 15 years at Sampdoria, Mancini left the club to join Lazio, where he won a further Scudetto, as well as the Cup Winners’ Cup, the UEFA Super Cup and two more Coppa Italia titles.

On May 2018, Roberto Mancini was appointed as the Italian national football team’s manager.

Roberto was on vacation with his wife at the Maldivian resort, Emerald Maldives.

Emerald Maldives Resort & Spa is a new 5 star Deluxe All Inclusive Resort, proud member of The Leading Hotels of the World. The Resort located in Raa Atoll, Republic of Maldives, is surrounded by 1.5 km of white sandy beach on a 20 hectares private island, and it boasts 120 luxurious Villas with both contemporary and tropical design, divided into 60 beach villas and 60 overwater villas.