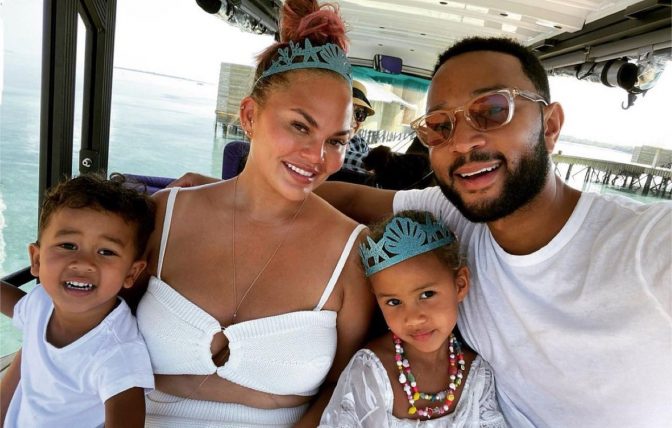 One of Hollywood’s fan-favorite couples, John Legend and Chrissy Teigen have left paradise after enjoying a family vacation in the exclusive Soneva Jani resort in #Maldives.

The American singer, songwriter, record producer, actor, film producer, and philanthropist, John Legend met model Chrissy Teigen in 2006 when director Nabil Elderkin introduced the two during her appearance in the music video for his song “Stereo”. They became engaged in December 2011 and were married on September 14, 2013 in Como, Italy. The 2013 song “All of Me” was written and is dedicated to her; the music video was reportedly displayed at their wedding. The couple has a daughter born in April 2016 and a son born in May 2018.

It was not the first visit to Maldives for the couple. After years of dating, Legend actually proposed to Teigen in December 2011 on a trip to the Maldives over Christmas.

The couple visited the destination this time with their daughter and a son. Chrissy shared a series of snaps on her Instagram account documenting the family’s time away at the luxury Soneva Jani resort.

Located on the island of Medhufaru in a 5.6 km lagoon in the Noonu Atoll, Soneva Jani features both overwater and island villas.

The award-winning Maldives resort is synonymous with over-water luxury, superlative hospitality and rare guest experiences, and its recently launched new chapter marks the beginning of an incredible new era. Now open to guests, Chapter Two expands upon Soneva Jani’s portfolio of luxurious water villas, as well as introducing exciting new dining concepts, the Soneva Wellness Centre, and a whole new way to experience the best of the resort with Soneva Unlimited.