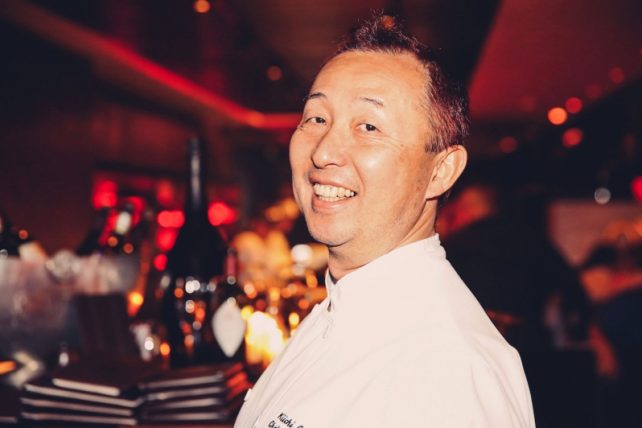 Kiichi Okabe Appointed as the Grand Masterchef of Soneva Jani

The Japanese Chef was formerly the executive chef of Shoukouwa in Singapore, a Japanese restaurant which was awarded two Michelin stars in 2016. He was also the Head Chef at Okku, which was named the ‘Best Japanese Restaurant in Dubai’, three years running.

Known for being a sushi mastermind bursting with personality and culinary talent, Chef Okabe started his career in Ebisu Tokyo where he perfected his skills in Japanese and International cuisine. He is a firm believer in the Japanese philosophy of Omotenashi, which is a deeply ingrained cultural principle to sincerely look after one’s guests. He believes in creating dishes that make his customers happy and boosts their well being.

Chef Okabe currently hosts private dining experiences at So Imaginative, a private celebration room at Soneva Jani for 20 people, where his menu is a fusion of Japanese delicacies with Maldivian ingredients. Diners can expect dishes like raw shrimp from Hokkaido with yuzu flavored seaweed and Soneva caviar as well as baked Indian Ocean toothfish marinated in Sakyo miso from Kyoto, Japan.

Located in Medhufaru Island in Noonu Atoll, Soneva Jani Maldives encompasses a collection of 24 over water villas. This is the lowest density developed resort in Maldives, set within a lagoon of crystal clear waters, fringed by pristine beaches and blanketed in lush tropical greenery.