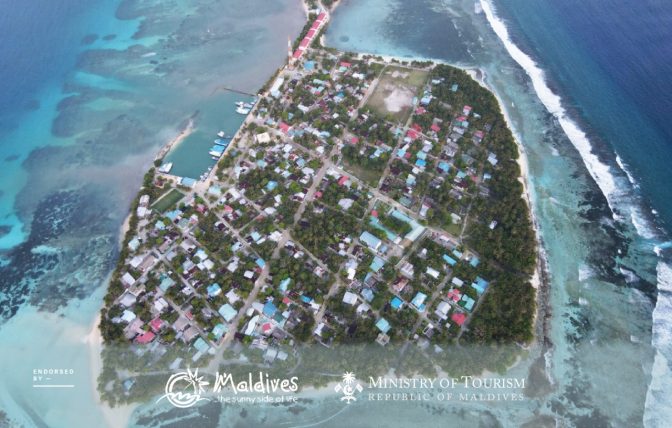 A 20 minute speedboat ride from Koddoo airport, Kolamaafushi is a discreet and comfortable tropical bliss located in the heart of Huvadhoo Atoll (The biggest coral atoll in the world).

Nestled in the south western corner of the atoll, it looks over a large expanse of shallow reef area. On the way to the Island from the airport, you will see tens of white powdery sandbanks. North and the south of the island lies five islets on each side which can be waded without getting our knees too wet. This unique arrangement of isles makes Kolamaafushi a gem of an island to explore.

The Special Portrait of the Island 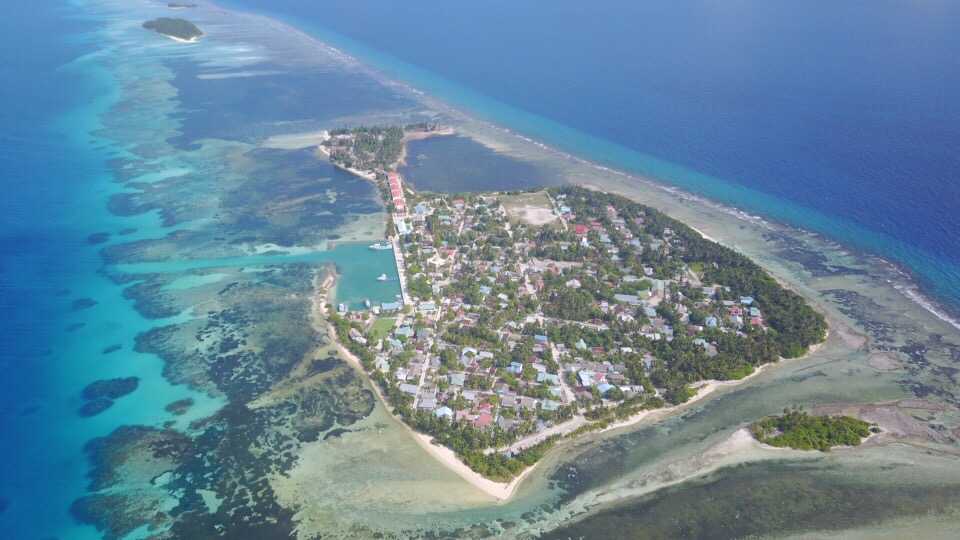 Kolamaafushi perhaps is the most interestingly shaped island in the Atoll. From above the island’s unique isolation in the middle of the lagoon is clear. West of the outer reef, it looks slightly detached from the outer ring of the atoll reef. This island is formed by pairing Maafushi with an island on the south called Kola. The thin causeway hyphenating the two islands is transformed with new apartment buildings by Chinese government which the locals refer to as the “Anni flats”. Kolaa part of the island is tenanted by a powerhouse, few boatyards and herds of goats. 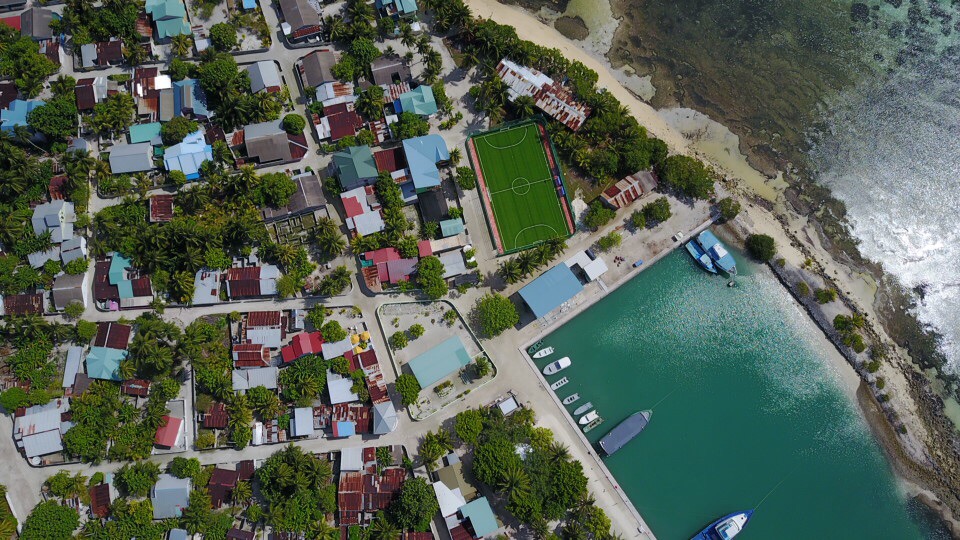 Two-thirds of the population has migrated to the capital part of the nation seeking jobs or post 10th grade education. Although the most recent statistics show that the island has less than 700 residents, it is interesting that the houses of the islands spread across the entire island leaving no forest or wetland areas. Though most houses are now abandoned, Kolamaafushi is known to have the most beautiful houses (often two-story) in the whole atoll. It is evident from the beautiful houses that the locals have a taste for luxury living. Almost all the houses in the island are built with stylish materials with comfortable furniture. This ample choice of accommodation for holiday makers opens a good market for local island tourism.

Rich in Fish and Cash 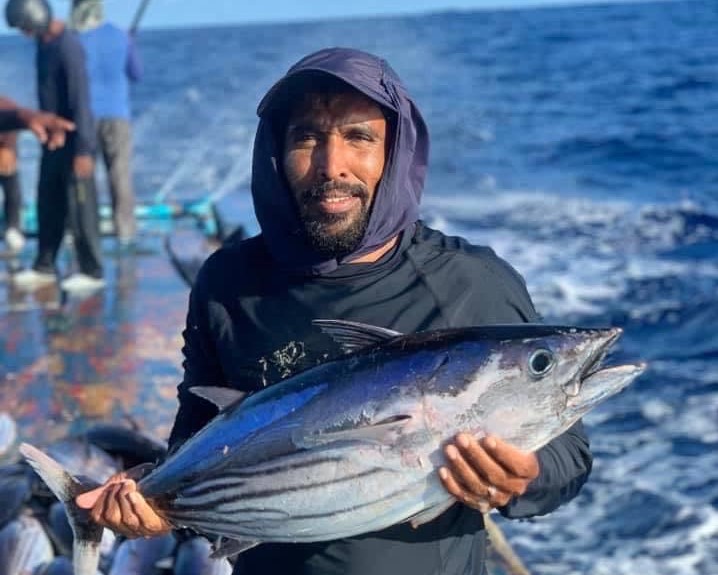 This small island is known as the home of fishing in the atoll. While it’s a fact that Fishing industry in the Maldives covers only 1.5 % of total GDP, in the level of island economy it still generates more income in just one week than any other government job.(Fact: most government jobs in the island take home around MVR8k, while the young fishermen makes around MVR20-30k a week depending on the catch). So it is evident that the earning power of fishermen is significantly greater than other government jobs. Koalmaafushi is one great example of the crucial role of the fishing industry in the Maldives. Perhaps this also explains why the Huvadhoo atoll has more ice plants than banks. The financial independence that comes from being the star island for fishing has been also seemingly affecting political affiliations for decades. 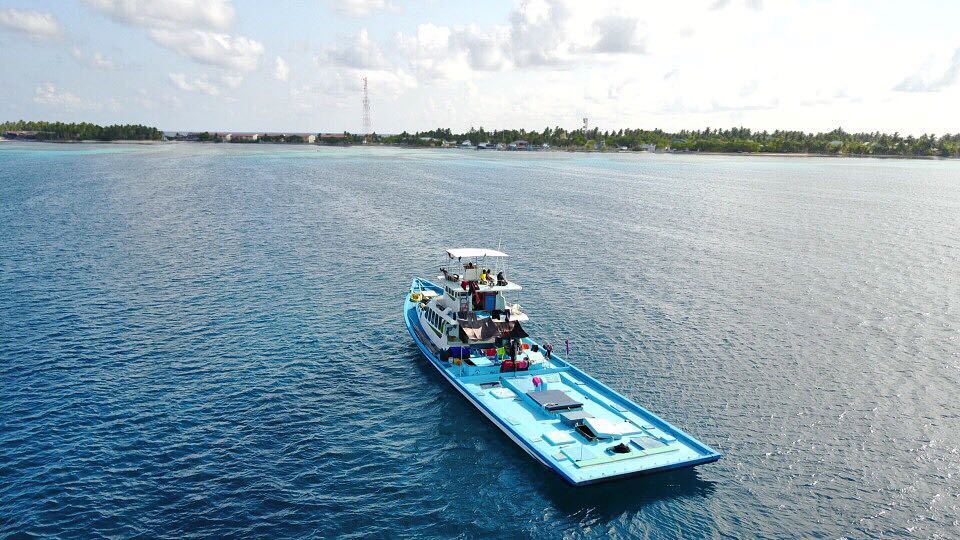 Ratu Meals
It is no surprise that most of the local delicacies are made from fish since the island is known for fishing. Kolamaafushi is famous for its version of “kandukukulhu” (fish curry). This curry is made from a special curry paste, the “huvadhoo havaadhu”. Spicy fish cakes, pastry balls with stuffed fish, fried fish with garlic and chilli are among the long list of local specialities made from fish.  Fried breadfruit-locally named “tharafone”- is one of the famous local staples.

“Huvadhoo bondi” is another local delicacy that is a must taste. Hugged inside the dry banana leaf, this sugary coconut flavored treat will certainly make the island stay sweeter. 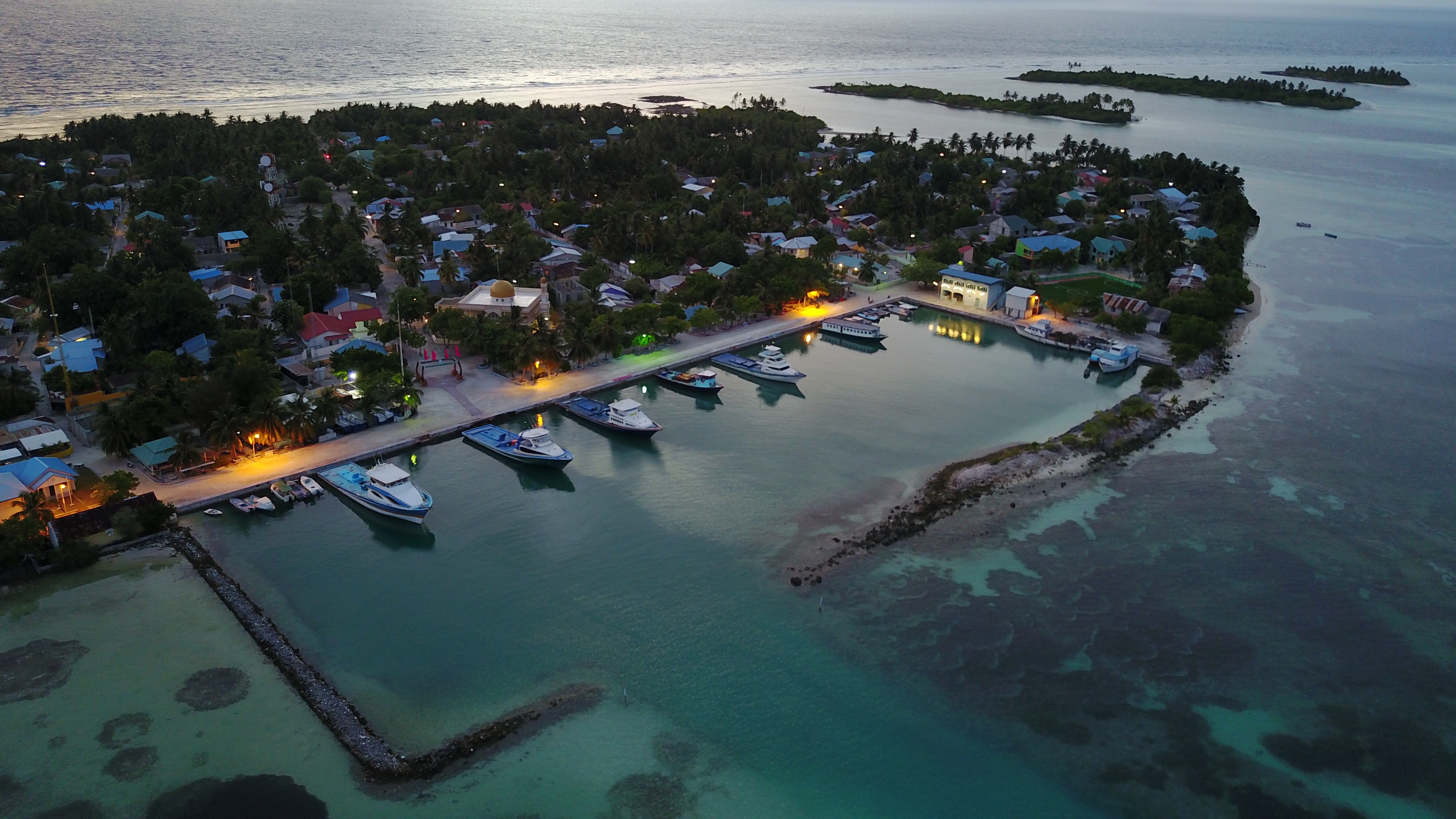 Unspoiled Dive Spots
Spearfishing is a common pastime for locals and so is diving. Heading down for lobsters, octopus and reef fish that crowd the coral reefs has always been part of island life. When it comes to diving, there are two specific diving points near the island. One, the Hurandhoo Reef- located in the north west of the island, this reef is rich in corals and caves. The fish life around this area is excellent as Whale sharks and Manta rays are often spotted. Two, the Hithaadhoo reef- located in the south west of the island, this unspoiled hidden gem of a diving spot is rich in coral life. It is very common to spot giant turtles, manta rays and whale sharks in this area.

Around the island there are few popular surfing and snorkeling points, Kurendhooni break, Villingili corner break and Malaim east. 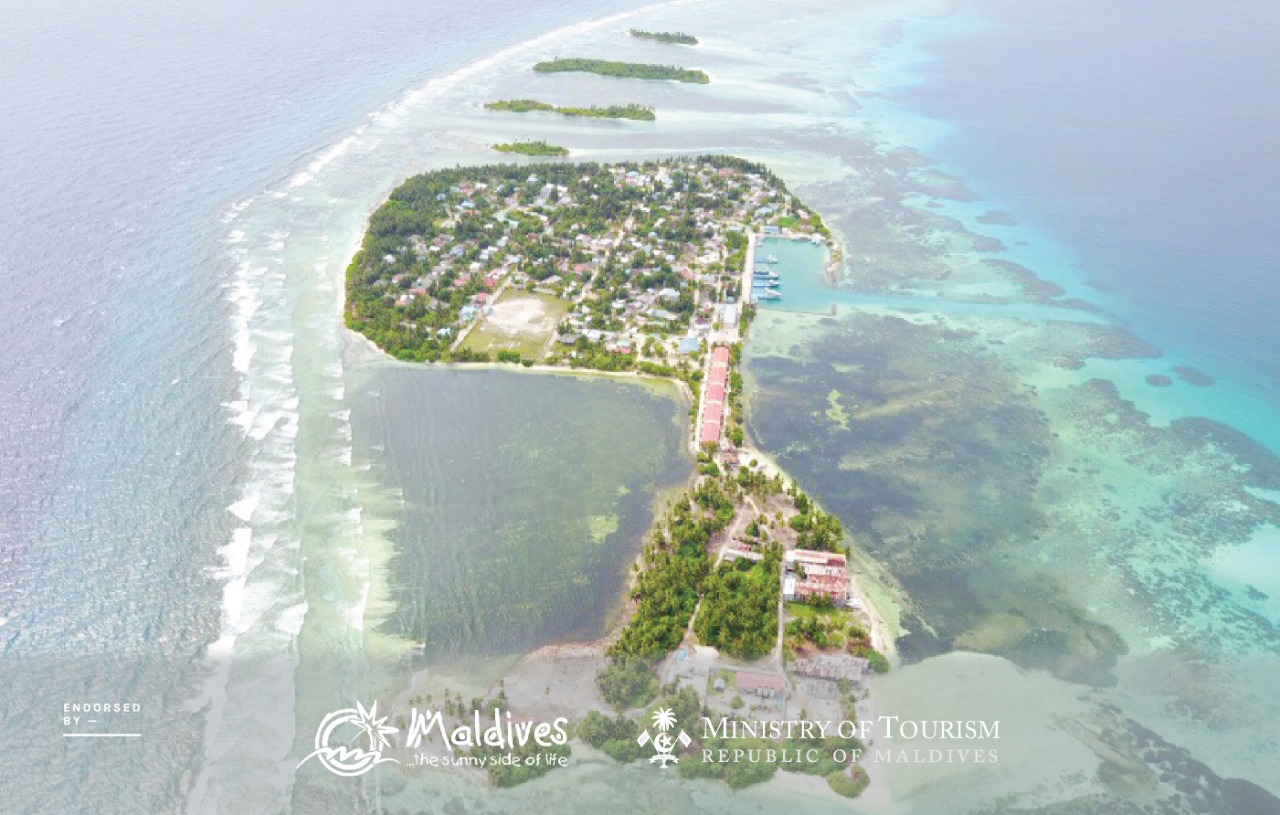 It’s an array of birds
If we are talking about Kolamaafushi, Hithaadhoo is a must mention. Designated as one of the two protected islands due to its unique features, this island is a famed spot for migratory birds and features flora. This unique island boasts plenty of tropical trees making it the perfect home for frigate birds. An array of birds hovering over the island at all times. Unlike the other islands, it has no palm tree. 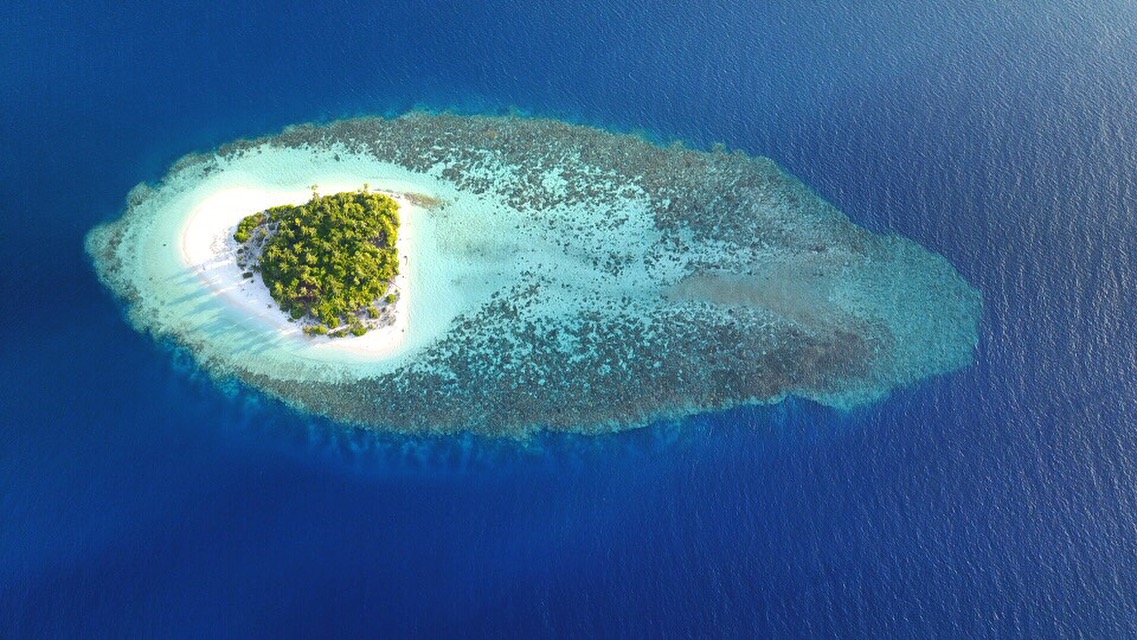 Starting from the unique arrangement of the island in the outer reef of the atoll, to the amazing islets to the two sides of the island which can be waded without getting our knees too wet, Kolamaafushi really is a must explore island. This discreet and comfortable tropical village may just be the perfect place to live out the island dream.

About the writer: Zahiya Saeed is a creative designer an an illustrator at Excorp Maldives. She writes articles related to tourism and Maldives history and heritage.