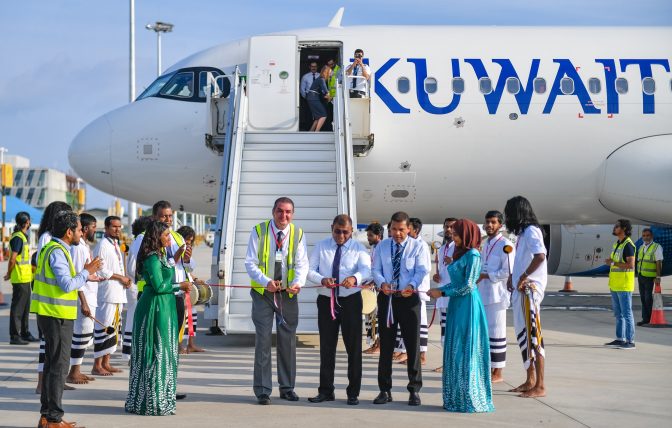 Kuwait Airways, the country’s flagship carrier, has started direct flights to the Maldives, on 31st October 2022.

The first flight was welcomed with a water salute at a special ceremony held this morning at Velana International Airport (VIA). The event was attended by Dr. Abdulla Mausoom, Minister of Tourism, Mr. Ibrahim Thoha, Deputy Managing Director of Maldives Airports Company Ltd (MACL) & Kuwait Airways Regional Manager Mr. Bashar Karem and with senior officials from Kuwait Airways, Ministry of Tourism and MACL.

Tourism Minister stated that with the start of Kuwait Airline operations, it will increase the number of passengers from Europe to the Maldives as Kuwait feeds European routes. The minister also stated that with the start of the World Cup in November, flights from the Middle East are gathering momentum. Kuwait airlines’ direct flights opened another door for Middle Eastern travelers to the Maldives.

Two weekly flights are scheduled between Kuwait and the Maldives. These flights will make use of A320 aircraft with a seating capacity of 134 passengers. Additionally, Kuwait Airways operates scheduled flights to Africa, Asia-Pacific, and to North America. In the first six months of 2022, more than 4000 travelers from Kuwait visited the Maldives.

For the winter season, many airlines are resuming its operations to the Maldives. MACL, a prominent stakeholder in the tourism industry is striving to provide more opportunities for airlines to operate to Velana International Airport.