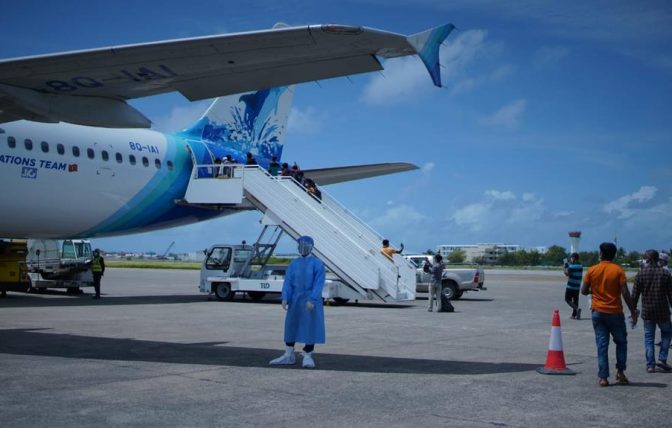 Maldives began 2020 with big bets on its tourism and aviation sector. Some of the high-profile marks were to welcome 2 million tourists, inaugurate 13 new luxury resorts, kick-off a new code F runway at Velana International Airport (VIA), greet a brand-new seaplane terminal, and to open 4 new regional airports across the country.

Surprisingly just two months into the new decade, they all now seem distantly impossible to accomplish. While the state and businesses eagerly wait for the “Sun to shine again”, the evolving and dynamic nature of the situation put more challenges to predict the end line and aftermath impact of COVID-19. Hence, the tourism and airline industry have been desperate to make a quick comeback, restore numbers and make money again to compensate for the lost revenue period.

Simultaneously, it also would be a good idea for authorities and service providers to perceive that the COVID-19 offers a golden opportunity to realize and review the existing hiccups in the system to mitigate similar situations and develop it in a better sustainable and liberalized environment in the future.

Airlines being a catalyst to an ultimate demand like tourism requires the later to function in order to sustain flying. While the tourism sector is optimistic for a quick return of demand once the borders are lifted, airlines are busy shrinking their scale to survive. A survey conducted by Travel Trade Maldives (TTM) with over 200 travel and hospitality participants in April reveals airline activities from the top 10 markets to Maldives are expected to begin as in the following table.

Certainly airlines and supporting services need government and shareholders blessings to navigate through this unprecedented situation. The three private airline operators in the Maldives have submitted a joint letter to the Ministry of Economics with their concerns and request for potential monetary aid. The request remains unexercised. However, the government has released an emergency fund of $161.84 million to support local businesses during the pandemic which doesn’t encompass the aviation sector.

There are no single event that can be compared with current condition in the history of Maldives. The closest was Tsunami in 2004 led to a 36% drop in tourist arrivals and 20% drop in air traffic movements at VIA respectively. A fortnight after the tsunami, 72% out of 87 properties in the Maldives were opened for business. However, traffic returned to pre-crisis level only after 12 months. Much of these were achieved through the strategies imposed by the government organization responsible for marketing Maldives tourism back then known as Maldives Tourism Promotion Board (MTPB).

According to International Air Transport Association (IATA), in the past outbreaks peaked for 3 months and traffic recovered within 6-7 months to pre-outbreak level. The recovery symptoms emerged so far doesn’t lean towards a traffic rebounce within 6-7 months for the ongoing pandemic. What is also often forgotten is the growth trend the industry enjoyed in the pre-crisis and it is significant in measuring the actual impact of the crisis. The airline industry in the past had an average 4 years to return to the pre-crisis growth trend after such catastrophes.

In the current scenario, IATA does not expect air traffic returning normal before 2021 and 2023. In a statement Brian Pearce, IATA’s chief economist “as the world economy enters into an economic recession, there will be job losses and fall in consumer confidence which certainly will delay the recovery” –

Ironically the top tourist destinations to the Maldives such as China, Germany, Italy, UK are the countries where the outbreaks biggest hits are recorded. The most efforts to restore normality is to be made by those states. This leaves the inbound travel trends in the pre-crisis Maldives enjoyed from those states in question marks. States concerns over the safety and wellbeing of their outbound travelers and hold the tourism spending circulation within the respected economies are miserable realities the hosting nations are forced to live with. Moreover, lack of worrisome with a potential second wave of the outbreak among federal governments are possible barriers the road of recovery unwillingly awaits for.

Airline activities are dynamic in nature and require advance planning to get it right. Traffic doesn’t generate overnight. Hundreds of activities concurrently process behind the scene to fill a plane. Without knowing the exact timeline Maldives borders will be lifted, it makes the situation more skeptical for hotels and agents to proceed with distribution. Stakeholders need to be informed in advance and they expect authorities to be more organized in an unprecedented situation like COVID-19.

The three private airlines who typically operate the domestic feeder services have taken the bigger hit. The abrupt disruption of the natural traffic flow has left them empty handed. In order to mitigate the consequences, several redundancy measures have been exercised. Training expenditures does not come cheap in airline operations and need advanced planning. Uncertainties over a restart timeline and recovery behavior is fueling the sequel. To be shaped better for the recovery, private carriers who were responsible to carry over 54% of the domestic traffic in 2018 need little more attention from the government. With no signs of a monetary aid or a tax break package leaves the immediate restart shadowy for these carriers.

Maldives Airports Company Limited (MACL) announced their readiness to handle future aircraft and passenger movements with regards to the given situation in late May. This provides a significant boost of confidence for the international and domestic carriers that will use the facility. Furthermore, it is a positive sign for the governments across the world to allow their travelers to visit the Maldives again. Nevertheless, the announcement by Soneva Group to establish a COVID-19 testing facility at Maafaru International Airport indicates the eagerness of hotels to start over and a void need to be attended by the authorities.

These are few indications that evince the road of recovery is set on gloomy conditions. It is also high time for the government, relative public and private associations and service providers to realize the opportunities that lie in this painstaking situation to configure a better future. This perhaps can help to mitigate negative impacts the whole nation and these two sensitive industries are forced to live through without achieving the targets that were set for 2020.

About the writer: Mohamed Rishan holds a Bachelor’s Degree (Hons) in Aviation Management from the University of Kuala Lumpur. He was the Route Revenue Analyst at Mega Maldives Airlines. He also served as an Assistant Manager of Network Planning & Revenue of Villa Air. Rishan, regularly teaches aviation and other subjects in local institutes. He is currently a postgraduate student in Master of Science in Aviation at RMIT University Australia.