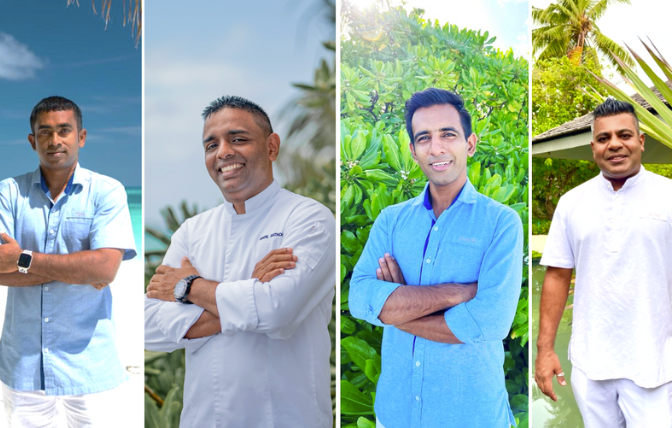 With a strong belief and passion in talent development, The Lux Collective’s well-loved resort LUX* South Ari Atoll has announced its recent internal promotions and names the key players in Culinary and Food & Beverage teams.

Born and raised in the sunny Maldives, Niyaz started his career back in 2001 as a waiter in Four Seasons Kuda Huraa. Along his Food & Beverage career path, he has joined several renowned properties in the Maldives, including One & Only Reethi Rah and Finolhu, where he contributed to the pre-openings. Since 2020, Niyaz has led the Food & Beverage service team of LUX* South Ari Atoll, overseeing a collection of 8 restaurants, 5 bars, and in-villa dining operations. His management capabilities and eye for detail are recognised with his promotion to the position of Assistant F&B Director.

Growing up in Sri Lanka, surrounded by fresh and colorful ingredients, Mark has always found himself interested in the use of healthy organic produce. His love for food in combination with passion for service brought him to the hospitality industry. Throughout his career, he has worked with numerous luxury brands across different countries and supported several pre-opening properties. Following his dream to work in the Maldives, Mark joined LUX* South Ari Atoll in 2018 as Executive Pastry Chef, and his leadership earned him the role of Executive Chef in 2022. Today, he spearheads the resort’s culinary innovations along with his team, while elevating LUX* Resorts & Hotels signature Keen On Green brand initiative.

Coming from India, Sangeeth joined LUX* South Ari Atoll as a bartender back in 2015. From the first days of his journey with the resort, he consistently serves as a role model for the teammates. His leadership skills, and knowledge of operations earned him the role of Food & Beverage Supervisor in just two years. Sangeeth was promoted to Restaurant Manager, and Food & Beverage Assistant Manager in 2019. His new role as Food & Beverage Manager is a result of his continuous strive for perfection and immense support of the island’s operation.

Daminda, originally from Sri Lanka, is another wonderful story of growing talents from within. Joining the resort 2008 as a bartender, he became the Head Bartender in 2011. Daminda is an ambassador of the brand’s purpose to “help people celebrate life”, always ensuring the highest level of service to guests in the outlets. His dedication and inspiration resulted in several promotions over a decade. He has been appointed as Assistant Food & Beverage Manager. Supporting talents and inspiring growth from within the organisation is one of the top priorities of The Lux Collective hospitality group. Its large team of shining personalities across different resorts globally and also at LUX* South Ari Atoll works day-to-day together on the island, creating memorable experiences for Maldives’ tourists and visitors.