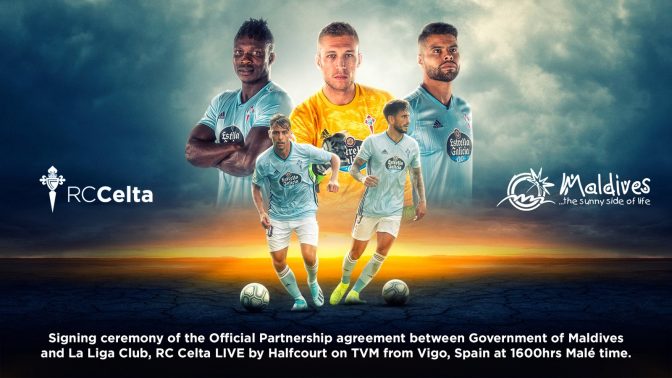 The signing ceremony of the official partnership agreement between the government of the Maldives and La Liga Club, RC Celta to be broadcasted live by Halfcourt on TVM from Vigo, Spain at 1600hrs Male’ time on 4th November 2019.

The signing ceremony will be held at Celta De Vigo’s headquarters in Vigo, Spain in the presence of international media. The agreement will be signed by Tourism Minister Ali Waheed and the club’s President Carlos Mouriño with other officials representing the club.

Following the signing, both partners are scheduled to speak to the media to give information on the partnership and the event will be broadcasted live both by TVM and Tourist Ministry’s twitter handle.

The club will extend training opportunities for Maldivian players, coaches and officials to develop football in the archipelago. The club will also play friendly matches with the national teams.