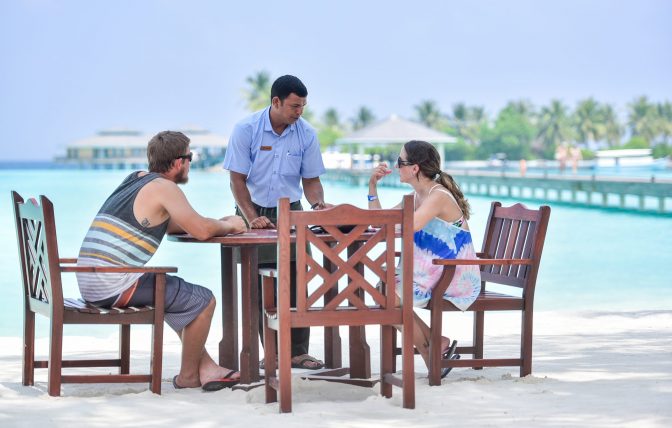 On New Year’s day, the law will make service charge a mandatory levy in the Maldives tourism sector.

As many resorts and other tourism establishments prepare to implement the legal imposition, challenges are emerging in understanding what the law essentially says or what it precisely means.

The difficulty is multiplied by the absence of rules and regulations which ought to provide flesh to the skeleton of law.

An amendment was brought to the Employment Act on 22 September 2020. Some of its provisions were staggered to take effect. One of the provisions that was parked for delayed effect was the one on service charge. The provision is scheduled to come to life on 1 January 2021.

The relevant provision is s52 of the updated Employment Act. It substantially says the following:

The proposal to amend the employment law originally came from the government. However, the amending bill proposed by the government did not have the same flavor. The version that subsequently became law was re-written by parliament, in its review of the bill.

The government draft did carry a provision on service charge but left the decision of levying a charge to the discretion of the employer and provided provisions to deal with a situation where it is ultimately collected.

In doing so, it simply said that if an employer levies a service charge from a consumer the proceeds must be distributed equally subject to certain exceptions specified in the section.

The tourism establishments have developed and sustained a certain ecosystem of their own. The senior staff are generally paid well and for that reason are usually excluded from being supplemented by a service charge distribution. The rank and file are not paid a healthy salary but are presumed to have a decent take home when supplemented by service charge distributions.

The diving school, water sports center, spa and jewelry shop are usually outsourced to third party contractors often on a fixed rental basis or a revenue sharing model. The security and recruitment are also often handled by independent contractors for a fee.

Often almost all tourism establishments maintain a storefront presence in Male’. Sometimes exclusive to a property or sometimes in partnership with another property. The officers working from those offices attend to and serve the requirements of the properties in Male’. The staff are generally identified as resort staff but are paid comparatively less in service charge as the bulk of the collection is paid to those working on the frontline (attending to guests).

Some resorts operated by international or regional operators (often having more than one resort property in the Maldives) may have a dedicated corporate set up either working remotely or attached to the storefront office in Male’ with a focus on sales and marketing and revenue management functions. The corporate staff are for practical reasons considered as resort staff and are therefore included in the distributions.

The law came into effect on 22 September 2020. It required the rules and regulations to be created within 6 months – the long stop date being 21 March 2021. The rules remain under development.

It is unfortunate that the legal provision is coming into effect without the benefit of rules and regulations to provide the context of the legal and regulatory framework envisaged by the legal requirement.

Lawyers, accountants and other consultants advising tourism establishments on the subject are hamstrung by the absence of regulations (and therefore much-needed detail) to aid in their advice to clients on the effective implementation of this mandatory requirement – at least from the perspective of regulatory compliance.

Just by way of an example, all tour operator contracts are settled way before a season arrives – generally 6 months to a year in advance. When service charge becomes mandatory mid-season, what would happen to existing contracts and settled rates, and should the new cost be absorbed as a business expense?

In another example, some general managers and other senior or executive staff on resorts are compensated rather handsomely. Should the more mortal staff on lesser pay slips share their distributions in equal measure with the blessed as well? Should the executive staff be considered within the meaning of all staff of the employer for non-discriminatory and equal distribution of the distributions?

Should the service charge collected by outsourced outlets such as dive centers, spas, water sports facilities and the like share their distributions with the resort employees? The question may be considered answered when the test of all ‘employees’ is applied since those outlets may not necessary have staff recruited directly by the resort and may well be direct recruits of these outlets. However, this conclusion becomes a little unsettling when the other provision on considering all services as one whole of the same business is taken in to account.

It is obvious that regulations to come may not be able to override the express provisions of the law. However, it is quite possible for regulations (as and when they come) to fill the current gaps in law by providing sufficient detail clarity and coherence.

In conclusion, until such clarity is achieved, the tourism establishments affected by this new policy may have to advisedly pursue a cautious practice that is as near to law as practicable.