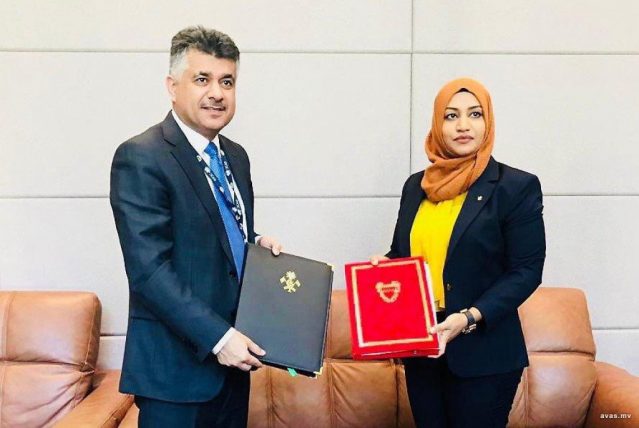 The Government of Maldives and the Government of the Kingdom of Bahrain has signed an Air Services Agreement to facilitate air transport services between the two countries.

In a ceremony that was held at the sideline of the International Civil Aviation Organization (ICAO) 40th Assembly in Montreal – Canada, Minister of Transport and Civil Aviation, Mrs Aishath Nahula signed the Agreement on behalf of the Government of Maldives, and Mr. Kamal bin Ahmed Mohammed – Minister of Transportation and Telecommunication of Bahrain signed on behalf of the Government of Bahrain.

Bahrain’s national airline, Gulf Air has requested for approval to begin operation to the Maldives. The airline will begin flights between the two countries on October 28 this year, with six weekly flights operating via Male’-Bahrain and Male’-Colombo-Bahrain route.

With the new agreement between Maldives and Bahrain, Maldives has now established air travel agreements with 47 countries. Under the agreements, 29 airlines from 21 countries operate to the Maldives.