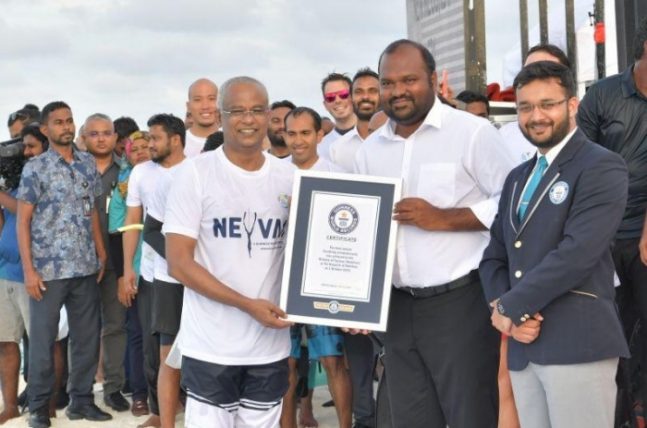 Tourism Minister, Ali Waheed has said that the Maldives will attempt the ‘World Scuba Diving’ record in the coming year.

During a press conference held before the Tourism Minister’s official trip to Spain, the Minister said that they intend to make ‘World Scuba Diving’ record as part of the “World Tourism Day 2020” which will see the longest human chain underwater scuba diving.

The Minister made this statement while referring to the ‘free-diving world record’ attempt at Baros lagoon with 520 free-divers as part of this year’s World Tourism Day celebrations, which also marks Maldives’ first world record.

The event was the country’s attempt to break the world record previously set by ‘La Scuola del Mare 2’ – Verona, in Torri del Benaco, Verona in 2009 with 280 people free-diving simultaneously.

“This attempt will give us the opportunity to promote the Maldives and showcase the beautiful marine life here. We intend to break the current world record on the ‘longest human chain underwater scuba diving’ by re-creating this on World Tourism Day with locals and foreigners alike at one of our mesmerizing islands.”

The current world record for the ‘longest human chain underwater’ was achieved by Indonesia Women’s Organisation (WASI) in Manado, North Sulawesi, Indonesia on 1 August 2019 with 578 people.