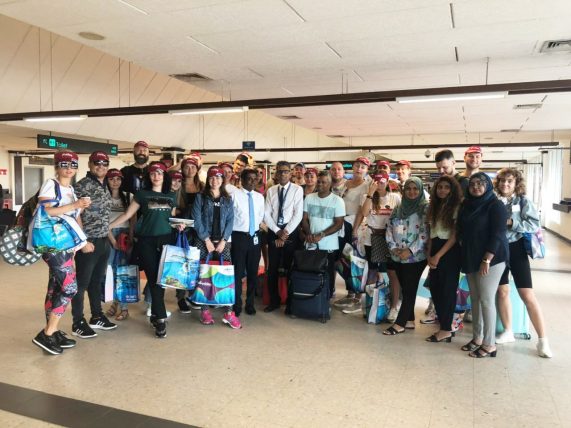 Different activities are being held by Maldives Marketing and Public Relations Corporation (MMPRC) throughout the year to promote the Maldives as a tourist destination. Among those include the Familiarization trips being conducted through international bloggers and social media influencers where they will be sharing their experiences in the Maldives. As such, 45 influencers have visited the Maldives from Ukraine on 8th September.

These influencers were brought to Maldives by Resort Life. The Ukraine influencers will be spending their week a long trip in Kandima Resort and Riu Hotel Maldives respectively.

The Ukranian influencers were welcomed to the Maldives by the Managing Director of MMPRC Mohamed Thoyyib, himself at Velana International Airport.

On the occasion of Ukrainian influencers visiting the Maldives, Thoyyib has applauded the work individual parties are doing to promote the Maldives as a tourist destination and stated that, “These Familiarization trips have been successful. Tourist arrivals from these markets have shown positive growth.”

The first six months of 2019 is the most successful for tourism after 2010 with 1.1 million tourists visited already. The rate of tourist arrival from Ukraine till July was 7,623 which was 12.6% increment compared to the end of July last year.