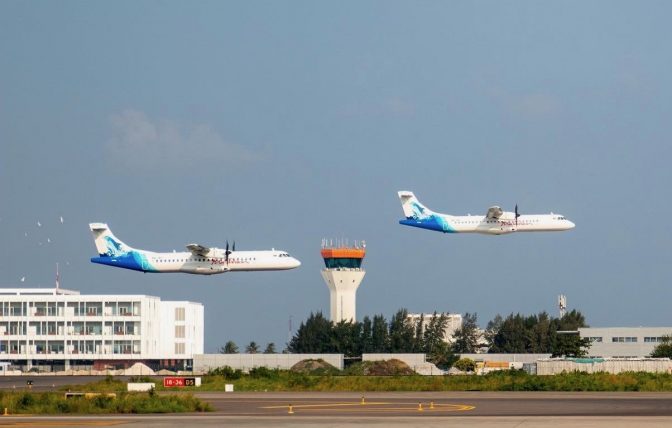 The two ATR 72 aircraft landed at Velana International Airport (VIA) yesterday and were welcomed with a water salute ceremony with Vice President Faisal Naseem in attendance.

Today, two new aircrafts were added to our fleet. Video shows the touchdown of our new ATRs.We would like to thank the government for their support in making this possible,and Honorable Vice President Faisal Naseem for his participation in this historical occasion.@presidencymv pic.twitter.com/vgFXMmxLp6

Island Aviation purchased a total of three aircraft which were initially set to join the Maldivian fleet in October 2022, which got delayed due to manufacturing issues. Apart from the two ATR 72 series aircraft, an ATR-42 series are among the new vessels. The vessels will cost a total of USD 60 million (MVR 925 million), according to Island Aviation. ATR 72 aircraft seats 74 passengers, while ATR 42 aircraft seats 50.

Mohamed Mihad, Managing Director of Island Aviation, stated that Maldivian will purchase three more ATR aircraft early this year. He also stated that all vessels used by the airline on domestic flights will be replaced within the next two years.