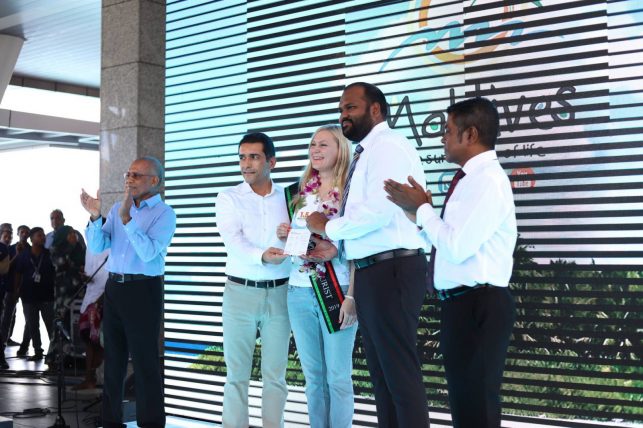 Minister of Tourism, Ali Waheed has announced that the new target for Maldivian tourism is two million tourist arrivals within a year.

He made this statement during the special event held at Velana International Airpot (VIA) following the achievement of the previous set target of 1.5 million tourists.

Tourism Minister, Ali Waheed said that this is a huge feat for the Maldives and that the Government intends to achieve the two million target within the next two years.

He further highlighted that “this does not mean that Maldives Marketing and Public Relations Corporation (MMPRC) and the Ministry failed if we do not reach two million by December 31 next year. There is no pressure”.

Observing the numerous activities and events carried out to promote the Maldives this year, the Minister noted that similar activities would be carried out in the following year as well since the government’s aim is to reach the target in 2021.

Managing Director of MMPRC, Thoyyib Mohamed also said that “I will say this year was very successful. I am very pleased because we have worked satisfactorily. Most of what we have done will be reflected next year”.

Russian national, Marina Kazakova was the 1.5 millionth tourist to visit the Maldives in 2019 where she along with her husband was received by industry representatives during the special reception held at VIA.