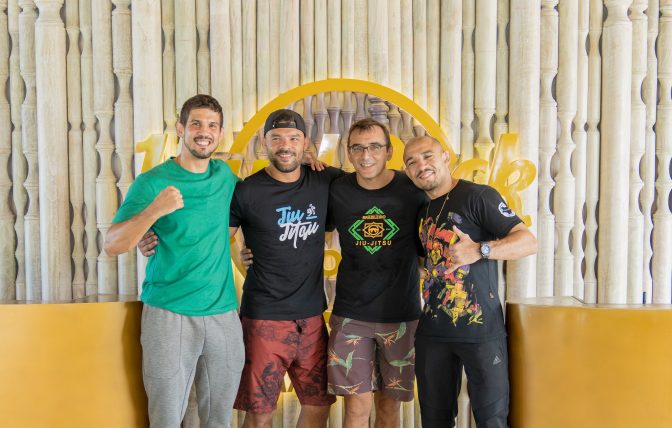 The Red Mat at the iconic Hard Rock Hotel Maldives is all set to warmly welcome the MMA, BJJ & UFC champs, José Aldo and Leo Santos during their 5-day holiday break on the integrated multi-island destination in the Maldives.

José Aldo, with a screen name “Junior” is a professional Mixed Martial Arts (MMA) fighter from Manáus, famous for his Muay Thai fighting style and a black belt in Brazilian jiu jitsu, where he excelled in the early 2000’s prior to his MMA career. He gained fame when he won his first MMA fight at the age of 17. Junior is also widely known for being the UFC’s first Featherweight Champion, and was the fourth and final WEC Featherweight Champion. Currently, he holds 31 wins out of his 37 fights of his career. Junior currently competes at the Ultimate Fighting Championship in the Bantamweight division. His recent win at UFC was in December 2021 fight against Rob Font. Considered to be one of the best fighters ever lived, a Brazilian Movie about his early years called “Stronger than the World” is an inspirational story of his life.

Leonardo Santos, a four-time World Cup champion of Brazilian Jiu-Jistu is also currently vacationing at Hard Rock Hotel Maldives along with José Aldo and family. Santos is currently competing in the Lightweight division of the Ultimate Fighting Championship, a good friend with Jose Aldo and also a well accomplished Jiu Jitsu & MMA Fighter. In the light weight division, in early 2000, he has won against big names of the time and holds an impressive record.

Stunning views and legendary amenities take a vacation at Hard Rock Hotel Maldives to the next level with 178 extravagant guestrooms, suites, villas and overwater pool villas. Guests can also treat their taste buds to delectable on-site food and beverage options, ranging from a Pool Bar and Pan-Latin restaurant to authentic American cuisine, just steps from the hotel.

The hotel also offers direct access to The Marina @ CROSSROADS Maldives, where an array of shops and over 12 restaurants, all styled on the chic elegance of a European Riviera, await. From authentic American cuisine at Hard Rock Cafe to the acclaimed flavors of Ministry of Crab’s award-winning dishes and finely curated local specialties, the culinary offering sees a collision of cultures come together to offer an array of exotic international cuisines.