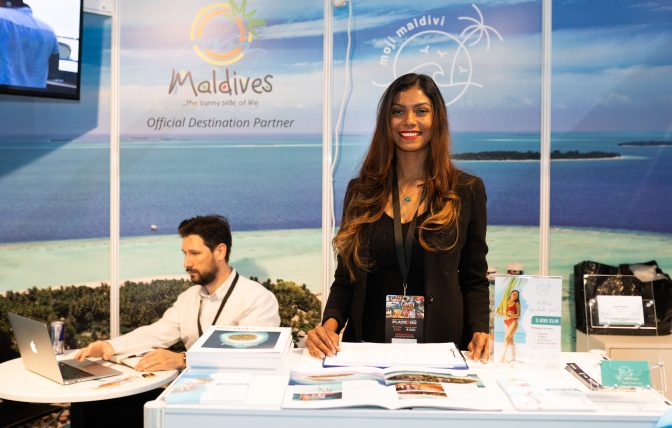 Moji Maldivi in association with Visit Maldives has taken part in PLACE2GO 2022 to promote and strengthen the Maldives visibility and brand presence in the Croatian market. The fair was held from 8th – 10th April 2022.

International Tourism Fair PLACE2GO is an annual travel and tourism fair held in Croatia since 2012, with more than 15,000 visitors attending each year and 200 exhibitors from 35 countries participating, including neighbouring countries India, Indonesia and Thailand.

The goal of participating in the Croatian fair is to change the perception of Maldives solely as a honeymoon luxury destination. As such, Managing Director of Moji Maldivi Aishath Nuzuha focused on sharing different varieties of tourist products ranging from resorts to guesthouses in local islands, as well as the unique experiences travelers can have in the Maldives speaking at the fair. Furthermore, she emphasized on the latest ease of travel restrictions imposed on tourists in response to the emergence of the Covid-19 pandemic. The PLACE2GO expo had a lucky draw held for the public during the fair, which includes a holiday with complimentary 4 nights stay in a destination for two including Airline tickets from Turkish Airlines. Moji Maldivi participated in the lucky draw in association with Villa Hotels by contributing to the complimentary stay for two person in the Maldives.

Participating in Croatia travel fair is one of the marketing activities initiated by Moji Maldivi for the Balkan and South East Europe Market for 2022. Recently, the team has represented Maldives in the largest tourism fair in Balkan market, Sajam Turizma held in Belgrade, Serbia. The prestigous fair in Belgrade was visited by the Tourism Minister Dr. Abdulla Mausoom and Maldives Delegation, where the Minister thanked Moji Maldivi for their engagement in the fair and the destination promotion activities conducted by Moji Maldivi to the large number of visitors.

Moji Maldivi will also be participating in the upcoming largest Tousim Expo in South East Europe, ITF SlovakiaTour 2022 to be held in Bratislava, Slovakia at the end of April, adding another successful promotion activity in their initiative to conduct several marketing campaigns in different parts of the Balkan and South East Europe region.

The Maldives has welcomed more than 54,000 tourists to the country from the Balkan and South East Europe market during 2021, namely Romania, Hungary, Bulgaria, Slovakia, Serbia, Slovenia and Croatia. This year until February, the country has recorded over 17,000 arrivals from this region.

Moji Maldivi deems that South East Europe and Balkan region are potential source markets to Maldives, having the advantage of great connectivity and accessibility as well as spending power to travel to the Maldives. Hence with serious emphasis on destination promotion and marketing, these markets can be lured to the Maldives exponentially. Moji Maldivi is thankful for the outstanding support and contribution receiving from MMPRC in marketing and promoting the destination in this region.