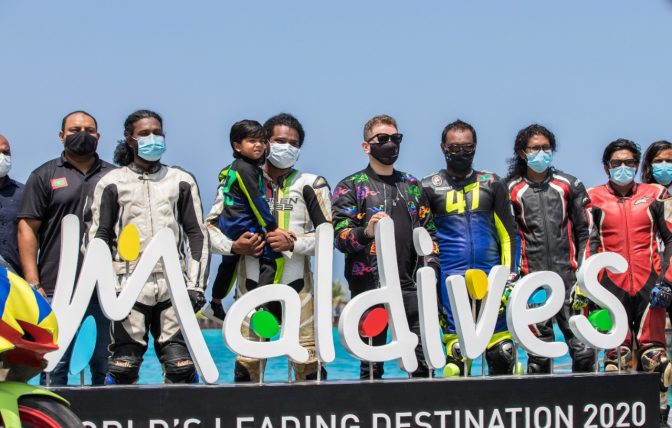 MotoGP world champion Jorge Lorenzo is in the sunny side of life for his vacation at Baglioni Resort Maldives.

Lorenzo Guerrero is a Spanish Grand Prix motorcycle racer who announced his retirement from road racing competition in late 2019. He won the 2006 and 2007 250 cc World Championships, and the 2010, 2012 and 2015 MotoGP World Championship.

He arrived at Velana International Airport yesterday where he received a very warm welcome from the Minister of Tourism Abdulla Mausoom, Minister of Youth, Sports & Community Empowerment Ahmed Mahloof, along with members from the Racing Association of Maldives.

“Maldives is one of the most beautiful places in the world,” Jorge Lorenzo commented. “I will be here for 15 days to relax and enjoy sometime in the sun.”

Baglioni Resort Maldives is located on the island of Maagau, in the pristine atoll of Dhaalu, just 40 minutes by seaplane from the capital Malé and consists of 96 villas, surrounded by turquoise waters, velvety white sand, and tropical nature. The villas are of different types perfect for every need: from those on the beach with a private swimming pool to those on stilts with access to the sea up to those dedicated to families.