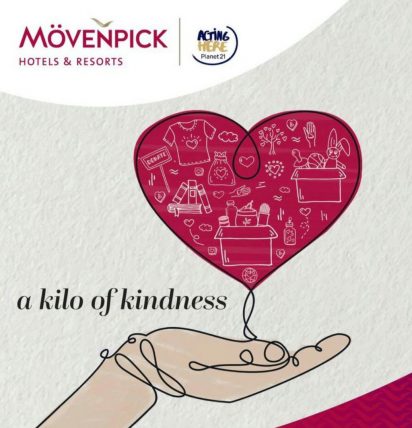 Now in its fifth year, #AKiloOfKindness global campaign, calls upon guests to donate at least one kilo of food, clothing and educational supplies to disadvantaged communities around the world, with a focus on the less fortunate and those in need.

This year more than 50 Mövenpick Hotels across Africa, Asia, Europe and the Middle East are supporting the campaign. Donations can be dropped between 1st-15th September at the lobby of participating hotels, which will then be distributed locally by the charities each hotel has partnered with.

“Our Kilo of Kindness campaign has grown immensely since its inception and in 2019 we are rallying support worldwide across all channels, within our hotels and local communities, in the hope to make this year the most successful yet,” said Nick Bosworth, Vice President of Brand Management at Mövenpick Hotels & Resorts.

Last year, a staggering 12,700 kilograms of supplies were donated via the participating hotels – a figure Mövenpick hopes to surpass with its 2019 campaign.