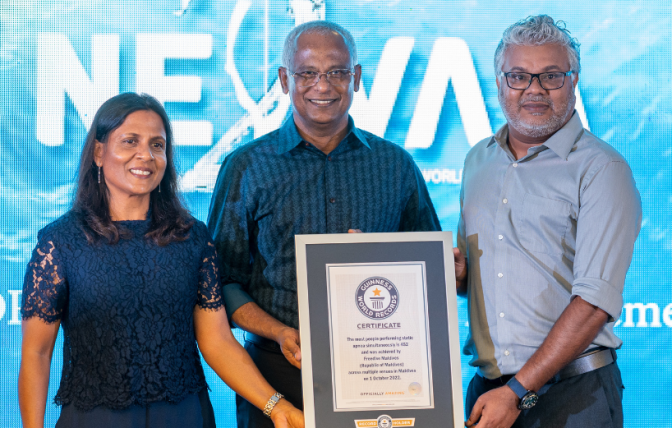 Neyvaa 2 has officially received Guinness World Record for the most number of people performing static apnea from all over the Maldives with multiple locations across the archipelago at the given time.

The certificate was presented by the Representative at Guinness World Record Swapnil Dangarikar and was received by the Founder of Freedive Maldives Fahud Faiz at the gala dinner held to celebrate the free diving record.

At the event held on 1st October 2022 at CROSSROADS Maldives, a total of 459 individuals participated in the event from 12 different resorts and several corporate companies. However, only 455 individuals were able to hold their breath underwater for one minute and thirty seconds as per the guidelines set for the record.

Neyvaa 2 organized by Freedive Maldives was held to commemorate Golden Jubilee – 50 years of tourism in the Maldives, this event promoted the passion for free driving and highlighted the Maldives on the map for free divers worldwide.

The event further focused on the climate change awareness. Using the hashtag #1breath4theoceans the organizers aimed to raise awareness on the global climate crisis affecting our island destination.