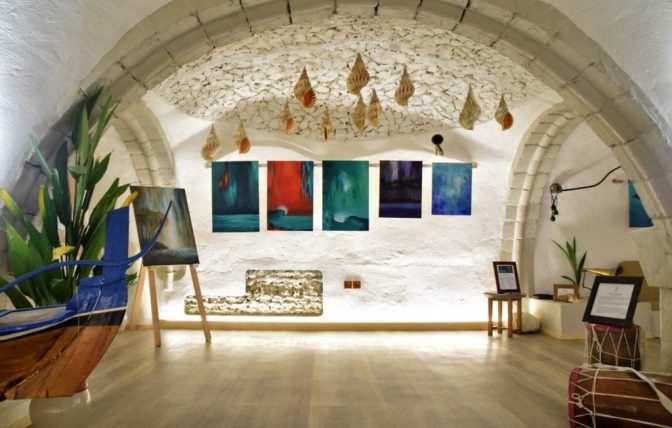 Nika Island Resort has recently launched Nika Museum under its initiative to become “patronage” of Maldivian culture and heritage.

The objective behind this initiative is to allow travelers to experience the beautiful heritage of Maldives and to make the local community rediscover the nation’s unique culture and heritage.

For this concept, they transformed an old furnace which was used to cast and forge metals. During the conversion of the furnace two dimensions were created to co-exist; the concept of conservation, which is part of Nika’s DNA, and the creation of a new space that constantly interacts with the guests.

Nika museum consists of a maze of tunnels that turn into galleries, coral made vaults which lead to an unexpected space where a select range of collection of historical artifacts, art pieces and creations by local artists can be seen.

“The museum aims to generate awareness among the travelers, to make them understand that the destination they are experiencing cannot be reduced to a series of breath-taking beaches”, Edoardo Caccin, the External Director at Nika Island, said.

The museum is currently hosting the exhibition title, “The Island Nation” by Zuleyha Ali who is the first Maldivian artist to be selected to participate at the Florence Biennale 2017 in Italy. Her work has been showcased in international and national exhibitions in New York, Florence, Colombo, Beijing Singapore, Dhaka and in Male’.

Nika Island is a piece of Maldivian history, one of the first islands in Ari Atoll to become a unique destination in the world. The resort is located on Kudafolhudhoo Island, a 25-minute seaplane ride from Malé and is widely known for its collective image of preserving nature and culture in the Maldives.