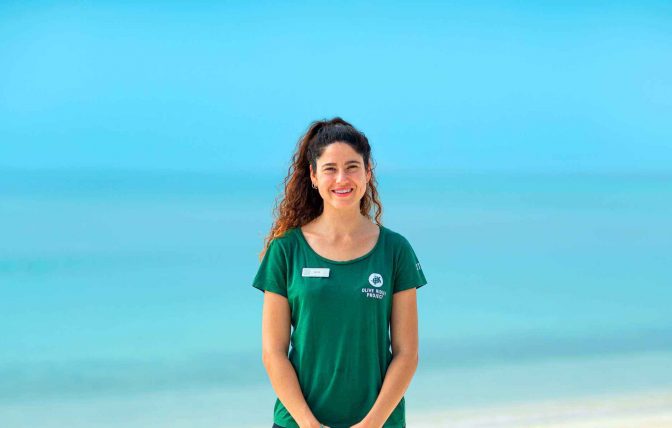 As we move into 2023 and sustainable travel experiences continue to become increasingly sought out, those wishing to travel more purposefully should look no further than Fairmont Maldives, Sirru Fen Fushi. Following the launch of a series of pioneering sustainable initiatives including the Sustainability Lab, Coralarium and Turtle Ranger Programme, the resort is delighted to welcome Neus Segura as its new marine biologist. A sea turtle biologist and guest educator from the Olive Ridley Project, the leading NGO for Turtle Research and Conservation in the Maldives, Neus’s appointment further strengthens Fairmont Maldives’ ongoing partnership with the charity.

The Olive Ridley Project is an organisation dedicated to protecting sea turtles and their habitats through a combination of scientific research, rescue and rehabilitation, and CSR Community outreach programmes. Having submitted photo data over the last 5 years of the resident turtle population, Fairmont Maldives is honoured to continue its ongoing partnership with the Olive Ridley Project by welcoming one of their very own turtle biologists, Neus Segura. The partnership will enable the resort to enhance its commitment to marine conservation and education on sea turtles both for guests and local communities, through the Fairmont School Award Scheme, whereby children from schools within the Shaviyani Atoll are invited to participate in educational workshops on marine conservation led by Neus and the team.

One of the most critically endangered sea turtle species in the world, Hawksbill turtles account for the majority of the individual resident sea turtles documented on the resort’s house reef, as well as those of neighbouring islands. Neus’s new role will consist of monitoring sea turtle nesting activity and educating guests and staff on sea turtle biology and the threats the species currently face. During weekly Marine Life Presentations, overseen by Sustainability Manager, Samuel Dixon, Neus will tackle various topics including turtles, manta rays, and other marine species, to create awareness and encourage the next generation of eco-conscious travellers to learn more about the marine ecosystem through Fairmont Maldives’ sustainability efforts.

Born on the island of Mallorca, Neus grew up near the sea and has always loved being by the Ocean. At the age of 16 she volunteered at a local sea turtle rescue centre, which sparked a desire to dedicate her life to the conservation of the incredible species. Whilst studying her degree in Marine Biology at the University of Portsmouth she spent her summers volunteering and working with turtles at Wildlife Sense in Kefalonia, Greece. In 2019 Neus became a principal investigator on board the research vessel Totevaag from Alnitak Research Institute for a period of three years, whilst taking her Masters in Marine Ecology at the University of the Balearic Islands. Her roles on board the vessel ranged from educating volunteers to introducing mitigation measures for the risk of bycatch in fisheries.

Guests of Fairmont Maldives will be able to participate in ocean life conservation missions and join the Marine Biology team in tracking, protecting, and assisting turtle hatchlings in their journey from nest to ocean. Some of the programmes they can take part in also include: