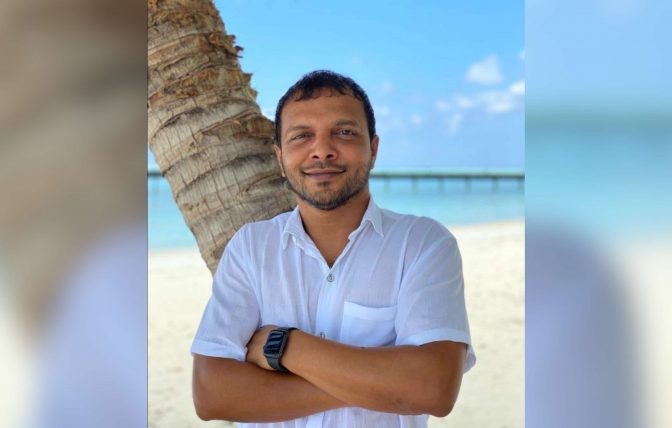 Naween whose family hails from Hithadhoo of Addu City, is 40 years old. He is professional who has carved for himself an illustrious career so far. Going back to his student years, Ahmed attended the Southern Secondary School, which was known by this name at the time and which happened to be one of the leading secondary school’s in Addu City and which is currently known as Sharafuddin School. After completing his O/L exams, Naween continued to serve at his school as Cadet Master for the next three years. Having noticed the opportunities and future potentials that were opening up for the Maldives through tourism enticed him to join Aitken Spence Resorts in the year 2003. So, on 6th June of that year, Naween joined the 1st Batch of the Central Reservations Department.

Naween revealed an interesting story behind his introduction to Aitken Spence. He came to know of AS when he accompanied a male friend to find a job for him and ended up working with Aitken Spence Reservations as he was passionate about the internet, and reservations was a potential gateway for young Naween at the time to embark upon and explore the world through a job of that sort. He never knew that he would be stepping into a career that would lead him to become an iconic hotelier in the hospitality trade.

At the time, the Central Reservations department was handled from Colombo, Sri Lanka. As a futuristic move, later on, the Management took the bold decision to set up a separate department for the Male sector and Naween was lucky enough to have been a part of those initial instigations, and to be cast as a member of the 1st Batch and to witness and experience those initial steps. So, Naween first entered the tourism industry a s a Reservations Assistant in 2003 and by 2006, was promoted to the position of Reservations Executive.

By 2010, Naween had successfully climbed his career ladder to become Senior Reservations Executive and then Assistant Manager for Reservations. Today, he has made it onto a position where he manages an inventory of 750 rooms with two well known Aitken Spence Resort brands; Adaaran and Heritance in the Maldives. At one point, he was out of the company where he was gaining experience in the travel industry for two years with “Get into Maldives Travels.” Today, he holds position as Head of Central Reservations.

The reservations point is the first step for any guest when they embark on planning their vacation. Naween also shared with us memorable experiences; from the point when the fax machine was used to handle reservations and to the point in the current era of the internet-of- things which has modernized the process of creating the reservations management software that we are using today.

Reservations during the very early stages, were mainly handled through fax and later on of course, the trend moved onto emails and now, bookings arrive straight to the system. Today, Naween and his team handle over 1000 inquiries and from 700 to 800 booking nights / per day for all seven properties. The Reservations Department is the nerve centre of the resort chain and they make the first impression for the resort where they get all types of information that will make the operations staff to become proactive. They pass information such as guest preferences, celebrations, what they like to do or not want to do and up to their dietary plans to name a few.

When queried about the challenges he faces on a daily basis, Naween disclosed, “We know what our guests want when they reach us, having known about the market for a period of time now and specially the different market segments. Me and my team are very well geared to cater to them with our experience. However, today we see the world as one common village where you will not be able to see all guest expectations, from their country of origin. To put it in simple terms, the future of tourism is based on major markets such as Chinese and Indian vacationers and they can be found all over the world. So, I see that their expectation patterns have changed due to globalization. So, we do not find that amount of stereotyped travelers today anymore.”

As his key competencies, Naween is able to understand the expectations of different types of travelers and regards his years of experience in the field has given him the ability to master this very well. With a career spanning over 17 years, Naween also shared some interesting insights on the operations behind reservations. He started initially working with 50 to 60 travel agents and today, he deals with over 1000 travel agents plus OTAs.

Traditionally, the average guest stay was from 7 to 10 days. However, over the course of time, this has reduced to 3-4 days due to the increase in certain major markets, and this increases the workload in reservation operations. In the past too, major markets used to be Italy, the UK and Germany although today, this has also changed incredibly. The tourism industry is a very sensitive sector and each and every positive and negative aspect of trading in this industry is easily noticeable. “In any part of the world, we see trends of ups and downs in this business through bookings,” he says.

He also added, “We started with three members and today, we have a vibrant and multi-cultural eight team who speak eight languages and I see that our success purely depends on the team, the leadership and support that I have from the Aitken Spence company.” He also proudly included that his dedication, hard work and continued passion has helped him achieve the success he sees today. He has sacrificed many day offs and worked extra hours to achieve beyond what was expected and this trait has enabled him to easily climb the career ladder.

When queried about his plans for the future, Naween stated, “Learning never ends. We are in an industry where one can excel in their career and to fulfill those dreams, I look forward to excelling in the field of sales and marketing as well. So, I have plans to expand into that segment in the near future.” As a message for youth who look towards carving a career pathway in tourism, Naween adds that adopting a positive mindset is key. He explains, “Your workplace becomes your secondy home.

Nothing will come to you on a silver platter when you start working in any field. The first year will be challenging and may be the second year as well. However, the sky will not appear cloudy forever. So, if you stick to one goal with a positive mindset, you will ultimately be what you want to be in time.”

As an ending remark, he also disclosed, “If you sit and ponder on little challenges that come your way, you will never be able to succeed in life. But, any challenge you face will make you stronger and allow you to move forward to achieve what you want. Naween’s story proves that everything in life happens for a reason and there is a plan for everyone. He is proud today for having selected Aitken Spence as his second home.