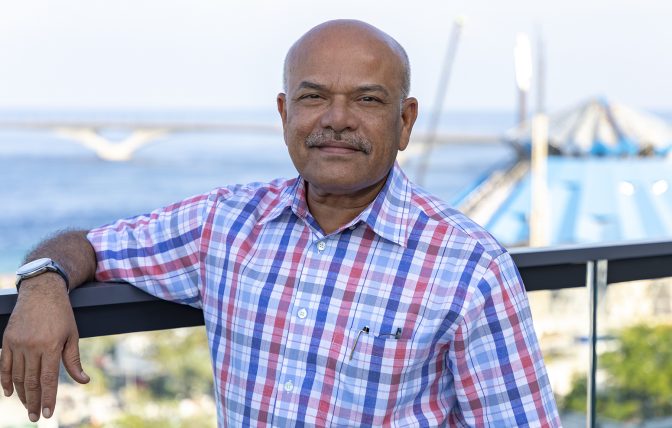 How did you get started in the hotel industry?

I have been working in the Tourism Industry for almost 30 years. I began my career at Meeru Island Resort and worked there for almost 16 years. During that time, I got the opportunity to be involved in developing 20 rooms in thatched style at Gasfinolhu. Right after the development, I was promoted as the Resident Manager there. When I left Meeru in 1994, I had been working as the General Manager in the resort.

I took a break during my time at Meeru to look after the property of Little Huraa for a couple of months. Later, I got the opportunity to visit Kuredu Resort’s opening in 1988 and to enhance their kitchen operations and services. At this time, I also operated 3 Yachts of Meeru.

What are the changes you have seen in the tourism industry since 1982?

I have experienced tremendous growth as foreseen by pioneers in terms of development of Infrastructure, the different phases of Technology in Engineering, Reverse Osmosis, Waste Management and Recycling, just to name a few. With the growth of world-renowned brands that invested in Maldives and continue to do so, there is a significant competition in the industry. I believe competition is healthy as it makes services more efficient.

What are some of the biggest challenges you faced in your line of work?

Sandals Hotels and Resorts, a foreign company were the pioneers of the ‘all-inclusive’ concept. In order to improve our services, plans to implement the concept in Maldives tourism industry was considered. Due to this, I faced with one of the biggest challenges in my career to implement this concept at Lily Beach.

After facing major setbacks, hiccups, and scrutinization, I quickly adapted to the theory of “the less we offer the more they demand and the more we offer the less they demand’’, to make the all-inclusive concept a success in Maldives.

Another challenge I faced was that when I took over the management of Mirihi island, an immediate refurbishment of the premises and accommodations was vital. At the time, I was then the GM for both Lily Beach and Mirihi.

Why did you choose to work at Maagiri Hotel after a break from the industry?

After a break of couple years directly from the Industry, I am back with a challenge to manage Maagiri Hotel. Maagiri has a special history to be proud of as this was the first property to have had tourists back in the 1970s, then called as Maagiri Lodge.

This is a city hotel in the capital of Male’, located at the most prominent and prime location with a fantastic view during the day and a fabulous skyline during the night. Maagiri is easily accessible via the bridge and by sea.

What is your greatest accomplishment?

My greatest achievement for me was receiving an Award of Recognition of long-standing service from the Ministry of Tourism. Whatever I am today is due to my belief, discipline, and ethics, the experiences I’ve learned from the field and the unfailing advice I’ve listened from the Owners and Directors of Champa, Crown, and Lily too. As you all know “Knowledge imparts and Wisdom listens.”