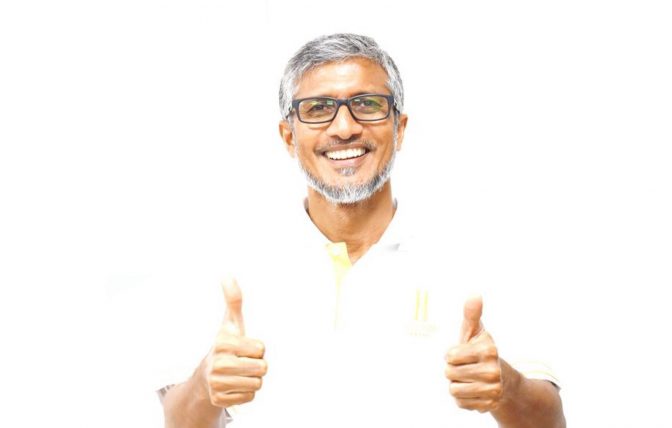 Mohamed Mahdy, who hails from Meynaa School in the Maldives and has been with Aitken Spence Resorts since its inception in 1993. He currently holds the post of Assistant Vice President – Administration at Aitken Spence Hotels & Resort Maldives representing brands of Heritance & Adaaran Resorts.

Mahdy is from Meynaa family, which had been named after Meynaa kaleyfaanu who is also his great grandfather and he happened to be one of the most prominent figures in the country during his era. Meynaa School, which recently celebrated 75 successful years of education in the Maldives is also named after Meynaa Kaleyfaanu. The school is located at Noonu Holhudhoo.

Mahdy began his career in the hospitality industry in 1991, following his completion of a one-year General Hotel Service Course. Right after, he joined Bathala Island Resort as Kitchen Trainee. “This being my first job, my job description entailed cleaning the kitchen, washing pots and pans, peeling potatoes and onions and cleaning vegetables to name a few,” he says. Two years later, he joined Aitken Spence and has been growing with the company ever since.

His experiences in the sector, after humble beginnings as a Kitchen Trainee, later included being in the role of Cook, followed by Accounts Clerk and Receptionist. He expanded his horizons even further and into the management world first by elevating into a Management Trainee and eventually became Assistant Manager at Bathala Island Resort.

Later he moved to the corporate office in Male’ to work with the Rannalhi Project Team. He also held a position with the Pre-opening Team of Rannalhi as Personnel & Front Office Executive, and subsequently was assigned the responsibilities of an Operations Analyst for Rannalhi & Bathala. Later again he moved to corporate office and worked with the project team of Meedhupparu and after the project he moved to Meedhupparu in the pre-opening team as Personnel & Front Office Executive for Meedhupparu. Later he was assigned the duties of Assistant Manager for Rannalhi, Operations Manager – Corporate Office, Deputy General Manager & General
Manager Administration and he played a key role in both Vadoo and Hudhuranfushi projects.

Clearly, over the course of his career, his growth is highly commendable and especially notable, when one gets to know how much his loyalty to the company remains to this day, having grown in parallel with the organization itself. When asked on what factors he believes has made him into what he is today, Mahdy disclosed, “I strongly believe that loyalty, honesty, integrity, commitment, and my passion for hard work with patience are the key values that have made me into who I am today.”

He regards his father as his mentor in not only his personal life but in his professional life as well.

“My father was an influential figure when it came to my successes in life and is a great inspiration towards my professional progress. He was also strongly behind my adherence to discipline and embracing strong work ethics, so I own a lot to him for remaining behind me every step of the way,” he added. Mahdy shared his insight with regard to how he foresees the tourism industry in the Maldives.

When compared with the past and the present. He stated, “Maldives was a unique and expensive destination during the very beginning and our supply to discerning tourists was at a very low figure, where resorts were concerned. There were very few places of accommodation and a huge demand existed. Tourists were interested in the island’s natural beauty and what we had to offer as an island and we eventually became an expensive destination. As a matter of fact, today there are many tourism establishments popping up like mushrooms and the aspect of sustainability is getting threatened as a result of it.”

According to Mahdy, his insight towards understanding the significance of embracing values of sustainability focused on a number of factors.  He disclosed that taking into account the size of the island nation and the carrying capacity is something we all need to think about. He added, “Maldives has a sensitive culture and we need to embrace tourism developments that will not harm our beliefs and rituals in any way. I also believe in creating an atmosphere of tourism that would cater to a niche rather than opening up to everyone.

When it comes to resort operations and developments, these entities would always pose as a direct effect to our ecosystem and immediate environment, so will tend to anyway become affected to some level, so we wouldn’t be able to entirely make it as eco-friendly. So, we need to safeguard our islands, its coral reefs and the pristine marine life.”

Taking into consideration the importance of encouraging young minds to join this sector, Mahdy gave youth a piece of advice. He said, “Start from scratch, where you can grasp the position you hold to the max and the task in hand and work on climbing the tourism career ladder, step by step. The tourism industry is a great sector to get into and a great opportunity to expand one’s wings if you are to excel not only in your personal but also your professional lives. This industry no doubt gave me many wings which I chose to fly with. It is an industry for anyone with the courage, attitude and determination needed to reach the top. However, at a young age, do not focus too much on the position you hold or the amount of money you make. Look toward a place that will give you opportunities to develop yourself. In my case, I was lucky to be a part of Aitken Spence Hotels at the early stages where the pathway was created for me and I embraced it to the full. And here I am today. I started as a Trainee Cook with this organization and today, I am a Director at one of the largest foreign resort operators in the Maldives.”

Mahdy concluded by saying that he hopes to continue to acquire more knowledge and improve himself even more whilst continuing to help the organization achieve its short-term objectives and long-term goals and assist in taking the company to even greater heights. “I am still a learner myself,” he says. “I will go all the way and hope to achieve a PhD in this field whilst also work as a Lecturer for youth where I can share my knowledge and knowhow. I wish to accomplish all this and more during this lifetime,” he acknowledged.

Mahdy is a past pupil of Meynaa School/N. Holhudhoo and also attended the Male’ English School and English Preparatory & Secondary School. After completing his Ordinary Level exams, Mahdy joined the School of Hotel & Catering Services, which today goes as the Faculty of Hospitality & Tourism Studies. Here, he completed the one-year General Hotel Services Course where he received the ‘Best Runner Up’ and ‘Best Student in Food Production – Practical & Theory’ awards, before embarking on to an illustrious career in the hospitality sector.