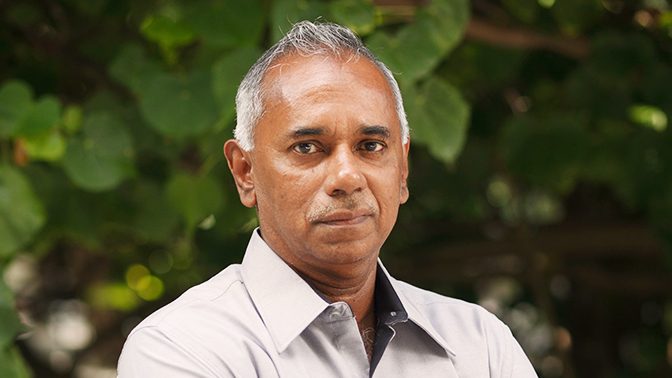 Mr Ramsay Perera is the General Manager for Kaimoo’s 3 resort properties, namely Embudu Village, Summer Island Maldives and Equator Village. After 12 years of service to Sri Lankan tourism, Mr Pererea joined Embudu Village in 1987. Since then he has been actively engaged in each and every step of the development of the Resort from 56 rooms to the current 118 rooms including upgrading the resort services and amenities. As the Company widened its operations and acquired two new resorts namely, Summer Island Village and Equator Village in 1997 and 1999 Mr Ramsay was given oversight of these two properties as well.

I was born in Sri Lanka, in a town called Kadawatha, which is close to Colombo. After school, I worked as a trainee in a reputed Sri Lankan company and was given the chance to go into the hospitality trade. I really enjoyed the work, so decided to stay in this field.

In Sri Lanka, I worked at John Keels Group, in their hotels, as an accountant. I also gained a lot of experience in hotel operations, which was a great experience.

In August 1987, I was offered a job in Embudu Village in the Maldives and after seven months promoted to Resort Manager.

At the time, the resort had few facilities, but working with the guidance and support of the Chairman, we tirelessly worked to improve Embudu & Kaimoo Group.

For new-comers to the tourism industry, my advice would be to offer the best service you can to your clients and work with dedication to help make the Maldives a world-class destination.